Nothing ruins your day like seeing a dead cockroach under your sink and wondering how long it lived in your house. Finding a living one crawling around is even worse! Despite their ranks among feared pests, American Roaches can be fascinating. If you want to learn what American roaches are, and/or how to get rid of them, check out our guide on these unacceptable house guests.

What Are American Roaches?

American cockroaches are a prevalent species of cockroach and one of the largest. In the southeast, they are often called palmetto bugs. However, this is a mistake, and palmetto bugs are a different species called the Florida woods cockroach, which looks different, stays outdoors more often, and emits a foul odor when threatened, while American roaches do not.

Despite their name, American roaches came from Africa on ships due to the Atlantic Slave Trade, around 1625. Due to global distribution, American cockroaches can be found almost anywhere in the world. 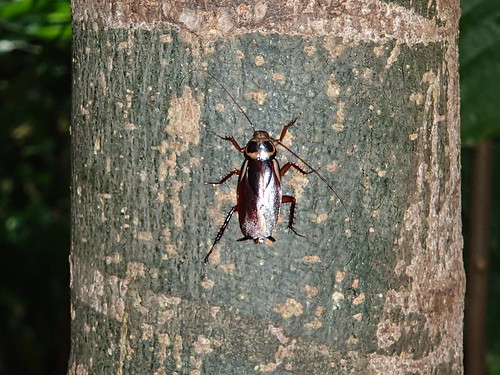 American cockroaches are a lighter brown with yellow markings on its back near the head. They have long antennae and six legs with spiky growths. They also have a distinctly thin shape, unlike palmetto bugs, which are broader and more pill-shaped. American roaches are also lighter and more consistent in color, whereas palmetto bugs are dark brown with black stripes down the body.

Where Do They Live?

American roaches are spread throughout the world and will live anywhere with reasonable humidity. They are most often seen near the equator, but also live in dryer and colder places, especially if they can reach the warmth and water in a human home.

The vast majority of American roaches live outdoors, but they will move into any social structure that seems worthwhile. They are likely to infest basements, bathrooms, and crawlspaces due to their darkness and water.
___

No one enjoys seeing a roach on the kitchen counter in the middle of the night. However, these insects aren’t just unpleasant; they can be dangerous due to contaminants. American roaches carry and spread diseases, contaminating surfaces through their feces and corpses. They can contain harmful bacteria inside and outside of their bodies that spread to anything they touch, and their fecal matter can be a source of allergic reactions.

How Do American Roaches Reproduce?

Females form an egg case on the tips of their abdomens. Once ready, a female uses its saliva for gluing the egg case to a surface where the eggs can develop. An adult female produces a range of six to fourteen egg cases in a lifetime. Each egg case has ten capsules containing 15 eggs on average, so even a single pregnancy will lead to hundreds of new cockroach nymphs. Fortunately, the eggs take about 45 days to hatch, and each roach needs anywhere from six months to a year to reach adulthood and reproduce.

Thanks to the relatively long life cycle, thorough extermination can deal with American roaches before they populate further. If you’re concerned about American cockroaches in your home, contact us immediately through our home assessment form or get a quote by describing your problem.
___


What Do American Roaches Feed On?

American roaches will eat just about anything and will go after whatever’s in easy reach. They can easily feed on any discarded organic matter, like human hair or fingernails. They have no problem eating paper products such as cardboard, but they’re also known to consume old building materials, plants, cosmetics, soap, leather, cheese, and even beer.
___


How Old Are American Roaches?

It is unclear when precisely American roaches appeared. Cockroaches in general, however, are even older than dinosaurs, dating about 359 million years ago. They are the very first living things to fly, and many of today’s pests, including termites, are descended from early cockroaches.

American roaches are a terrible pest that no one wants to see in their home. With so many effective treatment options, no one should have to suffer the stress and health risks of a roach infestation. If you need American roaches or other pests evicted for good, contact the pest control experts at Bulwark today.