Also known as the brown rat, the Norway rat is one of the most common pest rodent species around the world and the most successful mammal in the world after humans. If you’ve seen one of these rodents, you may have a serious problem that needs to be controlled as soon as possible. Learn how to get rid of Norway rats as well as useful information for identifying them and keeping them out.

What Are Norway Rats?

Norway rats have many names, including sewer rat, brown rat, street rat, common rat, water rat, Parisian rat, Norwegian rat, wharf rat, and Hanover rat. They are muroids, a broad group of animals that includes rats, mice, hamsters, voles, and gerbils. They are omnivorous and opportunistic, consuming any wild or human food available; this makes them prevalent in places with human garbage, such as garages. Their life expectancy is roughly about one year. They can weigh up to just over one pound but are usually much smaller and lighter. 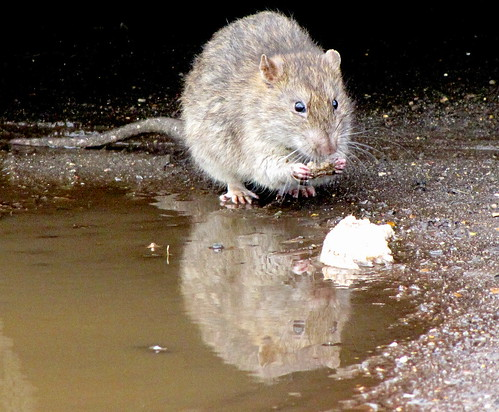 Norway rats are a large species, with adults reaching 16 inches from the nose to the end of the tail. Their body is relatively broad, though not as thick as some rat species. Their tails are mostly hairless and have a scaly texture. Like all rats, they have small eyes and ears compared to mice, but their nose is medium size. Their fur has many color variations, from different shades of gray to light or dark brown.

Where Do Norway Rats Live?

Believed to have originated in China, Norway rats are incredibly prolific and thrive on all continents, excluding Antarctica. It is the dominant rat in Europe and most of North America, particularly in urban areas.

Norway rats have a strong preference for living underground, hence their association with sewers. In the wild, they will often dig underground tunnels. However, they can also live just about anywhere that humans live. They are especially fond of wet, dark, and low areas such as basements, slaughterhouses, docks, and cellars. Lower floors of homes or multi-story apartments are the most likely places to find Norway rats, although they are also known to climb to higher places.

For the most part, Norway rats are nocturnal. They are also homebodies, choosing a place to live and only traveling about 20 to 30 feet away from that location in search of food and water.

While Norway rats are not the main cause of disasters associated with rats, such as the bubonic plague, all rats have the potential to spread disease and are a sign of unsanitary conditions. Another more pressing issue with a Norway rat infestation is the damage that is caused to homes by chewing; rats can gnaw on all sorts of objects, including walls, wooden beams or paneling, electric wires and cables, and even metal pipes. Over time, this can cause serious damage or interfere with home systems.

Dealing with Norway rats comes down to the following:

The occasional rat that wanders into your home can often be dealt with through these strategies. However, if you’re dealing with a large population of Norway rats, professional pest control measures should be taken immediately. If you’ve seen multiple rats in a short span of time, contact Bulwark and let professionals diagnose the exact species and the best solution.

How Do Norway Rats Reproduce?

Females, on average, give birth to litters of about eight pups. Despite the rodent’s short lifespan, a female’s pregnancy is short, so one female could have multiple litters throughout her life.

Is It True That Norway Rats Were Bred for Human Use?

While Norway rats themselves are wild animals, humans have indeed bred them into distinct species over time. Through selective breeding, humans created the fancy rat, a pet species with more distinctive fur patterns and the most common pet rat. Humans also bred Norway rats to create white rats, the most commonly used organism for laboratory experiments.

Why Do Norway Rats Gnaw on Inedible Objects?

People might assume that rats chew on things simply because they believe it to be food, although, in reality, they are more intelligent than that. Rats gnaw on objects to control the growth of their teeth. In nature, a rat’s teeth will continuously grow and could eventually interfere with eating if they become too large. By regularly chewing on hard objects, rats can wear their teeth down and keep this growth in check.

While you don’t necessarily have to worry about Norway rats spreading a dangerous disease, they are still unsanitary, and the damage they can cause to your home over time could add up. Don’t allow these rodents to shack up where you live. At the first sign of a rat or rat droppings, take countermeasures and contact Bulwark pest control to get a head start. The sooner Norway rats are dealt with, the less damage there will be, and the easier it will be to get rid of them.