It’s blackberry season again, and a blackberry cobbler sure sounds good! So you get your basket, and off you go to pick a mess of blackberries. After filling your basket and your belly with blackberries, you head back home. On the way, you begin to itch around your ankles, legs, and even your arms. Does this sound familiar? If so, you’ve probably experienced the nagging bite of a mite’s larva — commonly known as a chigger. 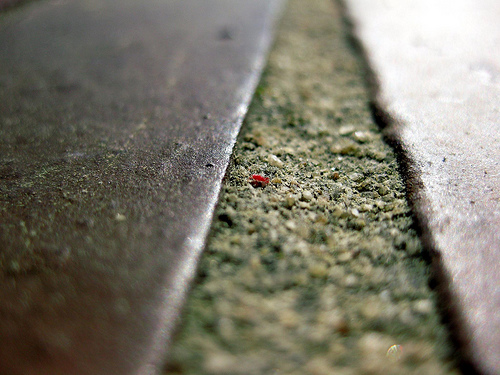 Chiggers are tiny, but if you ever have an encounter with them, you won’t forget it. Chiggers are mites and fall under the category of arachnids, which means they are related to ticks, scorpions, and spiders. Birds, small mammals, or rodents are the preferred hosts of this tiny critter, but humans are on the menu as well. The juvenile or larval form of certain species of mites are parasitic and feed off of hosts. When they mature into adults, they are no longer parasitic. In adulthood, they are predatory and feed on insect eggs, small insects, and other chiggers.

Harvest mites, also known as berry bugs, are considered to be the most abundant type of mites. The female harvest mites become active in early spring and can lay up to fifteen eggs per day. In their larval form, harvest chiggers are typically a bright red color and have hairy bodies that resemble velvet. In this form, they have six legs, but when they have fully matured, they have eight legs. Identifying these little creatures can be difficult, as they are smaller than small, and you can’t feel them on your skin until it is too late.

Where Do Chiggers Live?

Chiggers live in the tall grassy areas of fields, at the edge of forests, and in your lawn. Chiggers have a life cycle that lasts between 50 and 70 days. Adult chiggers, or mites, have the potential to live up to a year.

In the United States, chiggers are more prevalent in the Southeast, Midwest, and Southernmost regions. Early spring to early fall is when they are most active, and they are typically inactive after the first frost of the year.

Chiggers can be a real pain, especially if you live on a fruit farm or have children who love to play outside. They can also affect your pets. Most people have a few misconceptions about how chiggers feed on their hosts and how they should be removed. Chiggers don’t burrow into your skin, they don’t just drink your blood, and they are rather easy to remove from your skin without the use of harsh chemicals.

Humans have a worse allergic reaction than other animals. Our natural defense system kicks into overdrive and will form a stylostome; this is when your skin will harden cells come into contact with the chigger’s saliva, creating a tube-like barrier to prevent the saliva from spreading. The stylostome itself causes irritation, inflammation, and itchiness and presents as a red welt. The longer the chigger feeds, the deeper the stylostome will grow. Recovering from a chigger bite can take upwards of 10 days, but during this time, you can alleviate the itching and discomfort by using antihistamines.

Removing chiggers from your skin isn’t as difficult as you may think. Scratch the itch will usually kill them. A chigger’s mouthparts are somewhat fragile, and when our fingers brush them during scratching, they break away from their mouths and fall off; this renders them unable to feed again, and they will die. The most common places that chiggers can be found on your skin is under elastic-banded clothing, such as socks and underwear. Chiggers use the elastic bands as leverage to help them pierce your skin.

If you are away from civilization and unable to bathe, experts suggest occasionally rubbing your skin vigorously with a towel or something similar to remove chiggers. If you can bathe, washing with warm soapy water also works well. Now that you know how to get rid of chiggers, the outdoors should be a little more inviting.

Prevention is your best ally when entering areas that are likely to be infested with chiggers. If at all possible, you should wear pants, boots, and tall socks. Tucking your pants into your socks will also provide an extra layer of protection. Using insect repellent on your shoes, socks, and pants will also help to prevent chiggers from finding their way to your skin.

Chiggers prefer to be in the shade and can be found in tall grass, low-growing shrubs, and weeds. Maintaining your lawn will play a significant role in controlling chigger infestations on your property. However, while keeping your lawn well-trimmed will deter chiggers from making your yard their home, this may not keep them away entirely.

Another option is to use an insecticide on your lawn. This method may require multiple applications and can effectively kill the chiggers, ticks, fleas, and ants. If you have children and pets, double-check that any insecticide you choose is safe to use around them and be sure to follow the application instructions. Seeking out a professional exterminating service may be a better option.

How to get rid of chiggers has been a long-standing question surrounded by many misconceptions. Now that you know the facts about chiggers, you are better prepared for spending time outdoors with your family. Following simple preventative methods can go a long way in helping you enjoy being outside. Now get out there and have a chigger-free summer!