Mud daubers, commonly known in the south as dirt daubers, are fascinating insects. If you have ever seen a tube-shaped nest made with mud on the outside walls of your house or possibly inside your garage, then you know what a mud dauber is. They aren’t very aggressive towards humans, and they help control other insect and spider populations.

However, with the good comes some bad, as their nests are unsightly and create a mess. Mud dauber nests are capable of growing to massive proportions if left unchecked, and the bigger they become, the bigger the mess they cause. Having an understanding of these creatures can be beneficial if you want to eliminate them from the exterior of your home.

What Are Mud Daubers?

Mud daubers are in the category of insects known as wasps. They are solitary wasps and do not form colonies; this makes them less volatile, and they rarely sting humans unless provoked. Adult mud daubers seem to be predatory creatures because they hunt and capture other insects and spiders, but the captured prey is procured for their young. Adults will feed on honeydew, plant nectar, and the bodily fluids of their prey.

Mud daubers build their nests out of — you guessed it — mud. They can often be observed around puddles, where they collect mud to build their nests. Organ pipe mud dauber’s sculpted their nest out of mud that often resembles a long narrow tube. These nests can consist of multiple tubes that are constructed both horizontally and vertically. However, other varieties do exist:

Mud daubers go through four stages of life: egg, larva, pupae, and adult. Each life cycle is spent inside the mud nest until reaching adulthood. Each year adult female mud daubers continue the process of constructing their nests.

While building new nests, the females will also capture prey to place inside each cell. Though mud daubers will catch other insects, spiders are their primary targets. They capture a spider and sting it, injecting venom into the spider, which paralyzes and preserves it. The spider will then be placed into a mud cell while it is still alive. An egg is then sealed inside the cell with the prey. This process is continued until winter when the adult wasps die off. The typical life span of a mud dauber is one year.

In more temperate climates, mud daubers will remain active year-round. When the eggs hatch, the larvae will eat the spiders or insects that were left for them. The pupae then spin a cocoon where they will remain for another three weeks before emerging as adults. If this occurs during the winter months with harsher climates, the pupae will spend the winter in the nest and emerge as adults the following spring. 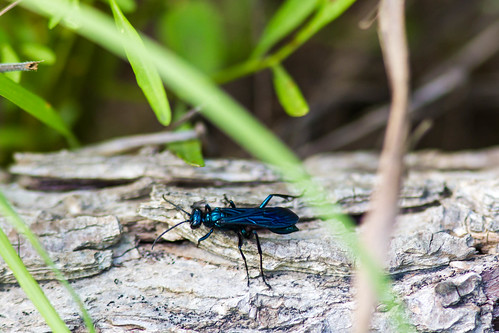 The most common colors for mud daubers are metallic blue and all black. A few of the different species of wasps in this category can have yellow markings on their bodies as well. These wasps are generally longer than social wasps and range from 0.5 to 1 inch in length. They have a skinny waist and a smaller abdomen than other types of wasps as well. Their other physical characteristics include six legs, two antennae, and wings.

Where Do Mud Daubers Live?

Mud daubers can be found throughout North America. They build their nests under the eaves of houses and buildings, exterior walls, inside of barns and garages, and also on trees. In rare cases, they will also build nests inside of your home if they find their way in through structural defects.

For the most part, mud daubers are beneficial to have on your property. They help to control the populations of annoying insects and spiders. One of the most critical nuisances they take care of is black widow spiders, which can be deadly to humans.

The main problem that mud daubers cause is the unsightly nests that they make. The fact that these nests are aesthetically unappealing and detract from the beauty of your home is undeniable — not to mention the mess made when cleaning them off the side of your house. In some cases, the nests will leave stains on surfaces such as vinyl siding and metal trim. For this reason, they are viewed as pests and may need to be removed and controlled, so they no longer threaten the curb appeal of your house.

In severe cases, it is prudent to contact a professional pest control agency to assist you with removing mud dauber nests and putting a plan into place to prevent further infestations. If you decide to eliminate them on your own, here are a few methods you can try:

Other than the ghastly sight of their nests and the mess their nests can make, mud daubers are very beneficial to have on your property. They will help to control other annoying insects, such as houseflies and even venomous spiders like the black widow. If you don’t mind the location they choose for their nests, you won’t have to worry about how to get rid of mud daubers. Let them be, and they will help protect you and your family from far worse threats in return.