Harvestmen, also known as daddy longlegs, are not as common a pest as roaches or ants. However, they can still invade moist areas of the home, such as outdoor decks, swimming pools, basements, or bathrooms. If you’ve been dealing with a swarm of harvestmen where you live, there are a few things you need to know before you fix the problem. Check out the Bulwark guide on daddy longlegs and how to get rid of them.

Harvestmen are a group of small arachnids, putting them in the same category as spiders, scorpions, mites, and ticks. They belong to the taxonomic order Opiliones and are sometimes called daddy longlegs or harvesters. They are a broad order of arachnids, with roughly 6,700 known species that are currently alive. However, scientists suspect that there may be as many as 10,000 living species, so many are yet to be discovered.

Harvestmen got their name because farmers first encountered them during the autumn harvest season. They are hunters that feed on a wide variety of insects, from flies to caterpillars, as well as worms, mollusks like snails and slugs, and other arachnids. Because of their eight narrow legs extending over the body’s height, people can mistake harvestmen for spiders. Most species only live for about one year. 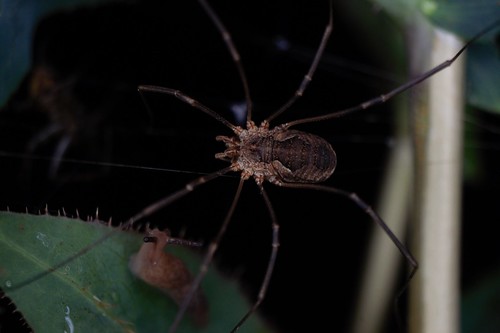 Harvestmen are divided into five distinct suborders with their own traits. In general, they are small, reaching only a half-inch in body length and 2 inches in leg span. They are known for their long legs, which are also extremely thin and light, so much so that they can walk on water by maintaining surface tension. They have a single body segment from which the legs extend and are usually dark brown. A common sight for those who spot harvestmen is a group of the insects on tree trunks with their legs interlaced together.

One interesting trait of harvestmen that sets them visually apart from spiders is that the tips of their legs appear to be rubbery or bendable rather than stiff. The ends of their legs consist of tarsomeres or many small joints, which is why, up close, it looks like the tips of a harvestman’s legs are curved instead of straight.

Where Do They Live?

All five suborders of harvestmen have species living in all continents except for Antarctica. As for habitat, most species need moisture to survive and to bury their eggs. They will group up in places with consistent water, such as outdoor puddles, the bottom of a rotting woodpile, or under leaf litter. In the case of homes, they are fond of any water-damaged or wet areas.

Although they are close cousins to spiders, harvestmen do not create webs, do not bite or sting, and do not have any sort of venom. The only real issue harvestmen pose, is their presence. They require a regular source of water to live, so they will often inhabit neglected swimming pools or hot tubs. They can also infest water-damaged materials in a home or damp areas such as basements.

Harvestmen are capable of releasing a foul odor to ward off predators and protect themselves, which is all the more reason not to let them take over your home or property. Because they usually breed during the winter, you can also be caught by surprise in the spring when their population explodes.

The number one control solution for getting rid of harvestmen and making sure they don’t return is to remove all easily-accessible sources of moisture. If you have any water-damaged material in your home or its foundation, such as from flooding or a plumbing issue, getting that material replaced is crucial. Adding dehumidifiers to basements and other damp areas will help as well.

Keep in mind that harvestmen are also very sensitive to cold and will usually die during the winter. The trouble is that human homes have plenty of water that they need and keep to a livable room temperature throughout the seasons. If your winter gets cold, you may want to ensure there are no easy entrances for the pests to get inside your warm house.

How Old Are Harvestmen?

Like cockroaches, harvestmen are extremely old. Based on fossilized remains, they are believed to have originated in the Scotland region around 400 million years ago, but this theory isn’t conclusive. Even these ancient fossils do not look very different from the harvestmen you can see today, indicating they have changed very little over time.

How Do Harvestmen Reproduce?

Part of the reason why harvestmen need moisture is for raising their young. Females lay eggs in moist soil, injecting them there with a needle called an ovipositor; this allows the eggs to survive the cold of winter and hatch in the spring. Females lay a single batch of eggs each year, and usually, it is the only batch they lay before naturally dying.

No, harvestmen do not have venom and do not bite or sting. There are urban legends of harvestmen having a venomous bite, but this is most likely the result of mistaking them for spiders.

What Defense Mechanisms Do Harvestmen Have?

Harvestmen have a wide range of defense mechanisms depending on the species. Some will camouflage with their environment, others will mimic the behavior of dangerous spiders, and others will make noise or play dead. The most commonly shared defense mechanism is spraying a foul-smelling chemical.

If you’ve spotted harvestmen in your home or even seen a large colony of them, it’s best to deal with their presence before they reproduce. Taking care of moisture sources will help, but professional assistance may be the best way to efficiently and reliably evict these pests from your home. Contact Bulwark today or fill out the easy online home assessment form and take the first step to be pest-free.