Spiders are useful in many ways, but they're not always welcome in homes. If you have unwanted spiders in your house, it's important to have a spider control plan to get things under control. While there are some DIY steps you can take to keep spiders out of your home, you may also need the help of a professional if you have to deal with a serious infestation.

No spider would dare to come back.

"We had Bulwark over for some pest control because we were getting overrun by spiders and roaches. We live right behind a farmer's field and every time they spade, we get the critters and the jitters. I have never seen anyone so thorough. John came over and at 6'5" tore into our bug problem like a tornado. I have never seen any company go into such depth. He scrubbed our stucco, washed our patio with a concentrated spray and dug into every corner of the yard and house. No spider would dare to come back. Awesome job!"
Written by: Bret H.
5 / 5 stars

Spiders are useful in many ways, but they're not always welcome in homes. If you have unwanted spiders in your house, it's important to have a spider control plan to get things under control. While there are some DIY steps you can take to keep spiders out of your home, you may also need the help of a professional if you have to deal with a serious infestation. 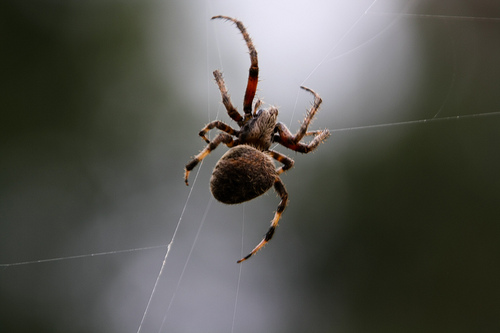 Spiders are arachnids. They have two main body parts, eight legs, and jaws that are designed to pierce and tear their prey. Spiders usually have six to eight eyes, but they don't often have good eyesight. The silk spinning organs in their abdomens allow spiders to weave the signature webs that you will find with most species.

Spiders play an important role in controlling other pests, though they're often considered pests themselves. Though many people are afraid of spiders, most species will not bite humans, preferring instead to run away when threatened. Almost all spiders are venomous, but few are dangerous.

Spiders come in many shapes, but all have the characteristic features described above. Most notable are the two body parts and eight legs. Spider species are typically identified by their color and shape. Their abdomen shape, size, and markings can also help you identify what type of spider you're dealing with. Some of the most common American spiders include the following:

Where Do Spiders Live?

Spiders can live nearly anywhere. The species determines the spider's preferred habitat. Spiders can dwell in trees, in the ground, under rocks, and along the eaves of your home. Many species look for dark areas where they can enjoy seclusion. Some are attracted to damp places in the home.

Spiders will typically make a home where they can find an ample supply of food. In your home, you'll often find spiders in or near windows, where other insects are more likely to enter and get trapped in their webs. A spider infestation may occur as a byproduct of another type of infestation. If you have an ample supply of flies in your home, for example, hungry spiders may follow this food source.

Due to their predatory nature, spiders tend to spread out. However, if you begin to find an unusual number of spiders in your home, you may have a full-blown infestation. A spider infestation often begins with a large number of spiders making their homes outside your house. If you see a lot a spider webs around your home, this is an indicator that you may soon have a problem.

Spiders can lay over 200 eggs in a single egg sac, and some spiders lay more than one egg sac. When these babies hatch, they're likely to find small cracks and crevices in your home and set up camp around your house. At this point, you may have a full-blown spider infestation.

The best way to tackle a spider problem is to take proactive steps to keep spiders out of your home. This includes doing things like:

If you have spiders in your home, glue traps can help you catch them. However, to truly tackle an infestation, you need to know what type of spiders you have, where these spiders like to live, and where their egg sacs are most likely hiding. For this, a professional extermination service is the best approach.

Though spiders aren't always welcome guests in your home, they can be very interesting creatures. Contrary to popular belief, spiders aren't actually insects. They're arachnids which is a different family. Other arachnids are scorpions, ticks, and mites.

Though spiders aren't known for having great eyesight, some jumping spiders can see light spectrums that humans can't. Some studies have shown that they can detect both UVA and UVB light.

While the majority of spiders are solitary, some will form communities. These spiders build large cobwebs and gather by the thousands to harvest prey.

If you need spider solutions for your home, contact a professional exterminating company like Bulwark Exterminating to get things under control and restore your home to a pest-free state.