You’ve probably seen pill bugs more than a few times. The curious way they roll up into a ball makes them fascinating to kids, but many don’t realize that they can pose a threat to your yard, garden, or indoor plants. Let’s go over everything you need to know about pill bugs to keep your greenery safe and your home pest-free.

What Are Pill bugs?

Pill bugs are part of a scientific family called Armadillidiidae and technically a subset of woodlice. As the scientific name implies, these insects are known for having a hard shell of linked plates, flexible enough for them to roll up for full protection, like a tiny armadillo. Pill bugs are often called rollie pollies, potato bugs, or doodlebugs. The common pill bug that most Americans have to deal with is Armadillidium Vulgare or the common pill bug.

The average lifespan of a rollie pollie is about two years, during which the adult body will molt its shell many times. Pill bugs primarily survive by eating decomposing matter from animals, plants, old wood fibers, feces, or even dead insects. However, they can also eat live plants, which makes them a problem for crops, lawns, or gardens if they get overpopulated. 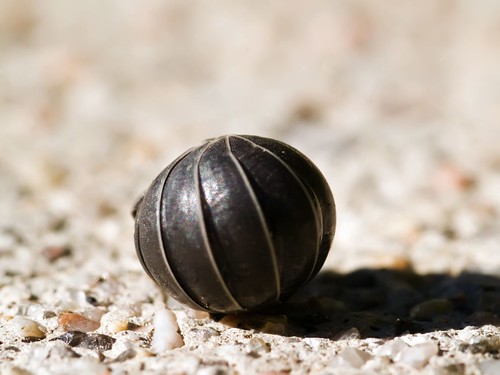 When unrolled, pill bugs look very similar to sowbugs. As you’d expect, they have a pill-like shape, oblong with rounded ends. Their color ranges with the species, from black to brown or gray. They have seven pairs of legs and large antennae that fan out or back from the head. Compared to other insects of similar sizes, such as ants, rollie pollies are speedy walkers.

Where Do Pill bugs Live?

Pill bugs will live anywhere with moisture, such as a watered garden or crop field; the reason for this comes down to their ancestry. You may look at these little, quick-crawling bugs and immediately compare them to tiny beetles or other insects. But, oddly enough, rollie pollies are crustaceans, like crabs or shrimp, and the only land-based crustacean in the world.

The main similarity between pill bugs and other crustaceans is that they breathe through gills, unlike other insects that breathe through tiny holes in their abdomens. Pill bugs need moisture to breathe, and for this reason, they usually stay in places with water, such as a damp basement or the lowest, flooded part of the ground after a rainstorm. If the gills on a pill bug’s underside dry up, they won’t be able to breathe and will die.

For the most part, pill bugs are decomposers and should not pose a threat as long as there is enough dead, decaying matter to eat. However, they can eat living plant matter, consuming any plant they reach. For this reason, pill bugs are an occasional pest in agriculture or gardening; this is especially true of areas prone to rainfall.

However, the consumption of dead plant matter makes pill bugs useful for gardens and the overall ecosystem. Not only do pill bugs serve as food for animals like birds, but they are capable of consuming heavy metals, gradually taking them out of the soil until they die. Pill bugs are useful indicators of whether an area has too many heavy metals in the ground. When not controlled, however, they can become the bane of a garden or field, consuming valuable and slow-growing crops like corn and strawberries.

If you’re having trouble with rollie pollies in your yard or garden or wondering how to get rid of pill bugs, chemical extermination will only be necessary in the most extreme cases. Here are a few things to consider for preventing and dealing with them:

If you ever have questions or concerns about pill bugs in your home, or if you’re unsure of what kind of pests you’re dealing with, fill out our home assessment. The experts at Bulwark will contact you as soon as possible and help get things back to normal.

Where Did Pill bugs First Come From?

Although pill bugs are quite easy to find in the Americas, the critters originated in Europe. They were referred to as woodlice since they were usually found under logs and other bits of deadwood.

Why Do Pill bugs Roll Into a Ball?

Pill bugs, like some millipedes, will roll up when they sense danger, to protect themselves from predators or physical harm. Merely touching one gently before it has noticed you, will cause it to roll up in response to the pressure and making them more difficult to grab. Another purpose for this ability, however, is to preserve the water in their gills better and stay hydrated.

Pill bugs range from being amusing to annoying pests; they pose little risk compared to other pests and are easier to deal with. Don’t worry if you see an unusual number around your home; with a few changes and some intervention from a skilled exterminator, the creatures have no chance of surviving, let alone thriving.