Wolf spiders are one of many kinds of spiders you can spot crawling around in your garage or other parts of your home. Their tendency to roam, move quickly, and bite can make them one of the most unpleasant types of spider to deal with. If too many wolf spiders have set up residence in your home, take a look at this comprehensive guide. You'll find everything you need to know about these critters, including how to get rid of wolf spiders.

What Are Wolf Spiders?

Wolf spiders are part of a very large family of spiders called Lycosidae, containing almost 3,000 species. They do not spin webs but still produce silk, which they use to line their flat nests and to protect their eggs. They become problems for homeowners if they get out of control, mainly due to their curiosity and aggression. Wolf spiders are known for being fast. In fact, the smaller species can run across the surface of water, such as a swimming pool.

Like many spiders, wolf spiders are nocturnal and look for prey at night, chasing it down and pouncing. If startled by something bigger than them, such as a human, they will usually run for the nearest tight space to hide, such as under furniture. In the process of searching for food, wolf spiders can easily wander into homes, garages, sheds, and more. 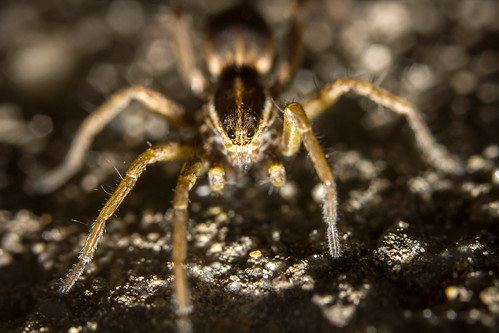 Wolf spider adults range in size depending on the species but usually don't have smaller than a half-inch legspan. The largest species, Hogna carolinensis, reaches the size of the average adult human hand. Wolf spider bodies, especially their legs, are coated in short, sensory hairs, which can be gray or different shades of brown. Their color patterns usually feature dark stripes.

Where Do Wolf Spiders Live?

Lycosidae species live all over the world, except for in Antarctica, Greenland, and the northernmost parts of Russia and Canada. What's more, they often enjoy living in human homes for their numerous hiding places. They do not usually climb very high, preferring instead to wander and nest at ground level.

Wolf spiders don't actively attack people, but they can bite as a way to dissuade threats. Their bites are mild and typically cause swelling, itching, and dull pain. However, seek medical attention if one bites you, just to be safe. If you see a wolf spider, try to frighten it away with a long object such as a broom. They should flee without trying to bite.

While wolf spiders aren't very dangerous, seeing one where you live can be startling and distressing. What's more, growing spider populations often indicate growing populations of pests that serve as their food, so you might have other small pests to deal with.

If you encounter a wolf spider, do not try to squish it. If the spider happens to be a female with eggs or hatchlings, they could spread rapidly. Instead, consider glue traps or catch-and-release methods. Also, as with most spider pest control issues, prevention is very effective. These spiders can wander into any open space, so look outside for cracks in your home's foundation and other possible entrances and seal them.

Yard care and organization will also help keep wolf spiders away. Keep items such as brick piles, firewood, or old junk off the ground, if possible. Otherwise, keep them 5 feet or more from your home's exterior walls. Trim trees that are close enough to shade your roof so lower branches don't provide a bridge to the roof.

With extreme infestations, you might need professionals with experience and advanced control methods to deal with a spider population. If wolf spiders have made an unwelcome visit to your home, tackling the problem with professional methods might be the best choice. Contact Bulwark or fill out the home assessment form to get an accurate and thorough diagnosis of the problem.

How Do Wolf Spiders Reproduce?

After mating, the female lays eggs and wraps them in a sac made from her silk. This silk is softer than usual and designed to insulate and protect the eggs. She uses this sac to conveniently carry her eggs at all times, securing it with stronger silk to her abdomen. Once the spiderlings hatch, they remain on the female's back for a period.

Once the spiderlings learn to shoot web, they create strands of silk they use like kites to catch wind or electrical currents. Using that silk strand, they can float along with their relatively small and lightweight bodies. This is called ballooning, and many spiders use this method of movement before they have matured.

How Do Wolf Spiders Hunt?

Unlike most spiders, which build webs to trap prey, wolf spiders venture out from their nests to find meals. They have very sharp vision; once they spot prey, they will chase it down, leap on it, and turn over on their backs, keeping the prey constricted within their legs. They then bite and inject their venom to incapacitate or kill it.

Like various other spiders, wolf spiders control the populations of other small pests by eating them. This can make them very useful for farmers and even homes. Their presence can also discourage other, more dangerous spiders. The problems people have with these spiders typically stem from them overpopulating.

Many people with spiders in their homes don't realize they have unwelcome visitors until the issue has gotten serious. If you regularly see any kind of arachnids in frequented areas of your home, you could be dealing with an overpopulation that will only grow. Contact Bulwark to address these concerns and enjoy the peace of mind that comes with a pest-free home.