Hobo spiders are one of the most unique types of spider and can be distinguished by their unusual webs. While many spiders pose little to no threat to people, hobo spiders can be more complicated. Get the answers you need with this handy Bulwark guide for these unconventional arachnids. You'll also learn how to get rid of hobo spiders if they've taken over parts of your home.

What Are Hobo Spiders?

The term hobo spider refers to a genus called Eratigena agrestis, also referred to as funnel web spiders or house spiders. Instead of creating a flat, kite-like web, a hobo spider creates a funnel of thick webbing that is wide at one end and narrow at the other. They are hunters with a varied diet, eating any invertebrate that touches their web, from flying insects to other arachnids.

Unlike with common spiderweb silk, the hobo spider's thread is not sticky. The hobo spider waits at the narrow end until prey mistakenly lands in the webbing. The web is spun in an oval shape with strands that stick out to trip any walking insects that start to explore the funnel.

Because the webbing is not sticky and its eyesight is poor, the spider will react immediately when it feels something disturbing its web, pouncing and biting to subdue the potential meal. This makes hobo spiders startling, as they can rush out and bite a person who bumps their web unintentionally. 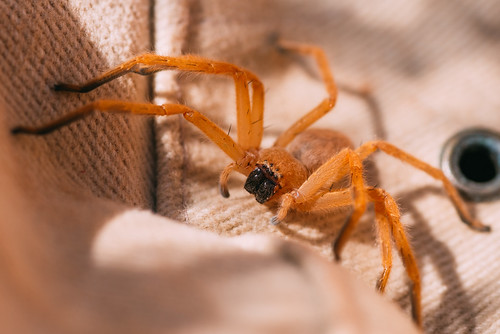 As far as size, hobo spiders reach about a half-inch in length with a 1.5-inch leg span. Different species will have their own appearance, but many seen in North America have grayish-brown bodies with dark stripes that zig-zag across the abdomen. Most species have hairy bodies and prickly legs, as opposed to widow spiders with smooth, glossy exteriors.

Where Do Hobo Spiders Live?

Although they're more common in Asia and Europe, hobo spiders are still found in North America. For most species, hobo spiders prefer fields or other outdoor places with consistent shelter and shade. They won't usually take over human homes because of competing spiders, which they try to avoid. In the absence of these competitors, however, hobo spiders may start to enter your home and populate in less-trafficked places, such as attics and garages.

Because of the funnel shapes of their webs, they will take advantage of any relatively constricted space, such as the open end of a pipe or the space between two objects on a shelf. Although they're well-distributed, with species in most parts of the world, hobo spiders are particularly common in the Pacific Northwest, and they are the most common spider to bite humans in that region.

Unlike the majority of spider species, hobo spiders are notoriously aggressive, biting humans with little provocation. Their venom may be irritating or cause swelling, but the myth that hobo spider venom is dangerous to humans has been largely disproved. While their bite may not be extreme, it could still be problematic for very young or elderly people or for those with compromised immune systems. For the most part, however, hobo spiders are undesirable simply for their tendency to bite and roam through your house.

Male hobo spiders will usually enter a human home around the late summer or fall in search of females. Around that time of year, you are most likely to see them, and they are unfortunately very impulsive when it comes to biting. Avoid a freely-roaming arachnid if it looks at all like a hobo spider. Beware of places where they tend to build their webs, too, such as in crawlspaces or other places that are low to the ground.

Hobo spiders need a tight and shaded spot to build their web funnels, so removing clutter and keeping darker places organized will discourage them from nesting. Adding more bright lights or sun exposure to such places could help as well. Hobo spiders are not skilled at climbing and will usually enter homes through lower places, such as a crack in the foundation. Sealing up and removing lower potential entrances will help prevent hobo spiders from coming back.

For those dealing with a serious hobo spider problem, professional pest control may be necessary. The team at Bulwark has experience handling troublesome pests of all kinds and can find a solution that fits with your home situation and needs.

How Do Hobo Spiders Reproduce?

Unlike with other pests, where the male and female meet by chance, the female hobo spider stays in her web at nearly all times. A male must exit his web and search for a female's web in order to mate. The male must carefully tap and strum at the entrance of the female's web in a specific pattern, and if his signals are unclear, the female will interpret the vibrations as prey and kill the male. If the female recognizes and accepts the male, however, then he approaches her slowly. After mating, the male leaves to find other females.

A female hobo spider can produce up to four egg cases, with each holding between 50 and 100 eggs. Females live much longer, about two years, compared to a few months for a male.

Is It True That Hobo Spiders Run After Humans?

Although hobo spiders are very defensive and will bite anything they suspect to be a threat, it's important to remember that their eyesight is very poor. In some cases, a person mistakenly disturbing a place where a hobo spider was resting could cause it to rush out of that area and then indirectly come into contact with the person, biting on impulse before fleeing. It's easy to see why hobo spiders have a reputation for charging and attacking people, but their behavior is partly misinterpreted.

While having a few hobo spiders around may be normal and help control other pest populations in your home, you must not let them get out of control. Contact Bulwark or fill out our easy home assessment form to describe your pest issue and get started.