Are you spotting more and more long-legged, hyperactive spiders in your basement or in even more common parts of your home? It's easy to diagnose these pests incorrectly, but if they are in fact cellar spiders, there are a few signs that will prove it. Bulwark is here with everything you need to know about these pests, including how to get rid of cellar spiders.

What Are Cellar Spiders?

Cellar spiders belong to an order of spiders called Pholcidae. Due to their long, narrow legs and small bodies, they are often confused for harvestmen, also known as daddy longlegs. These are different creatures, however, as harvestmen are not spiders and do not spin webs. Cellar spiders are a broad group with over 1,800 species and many names, including skull spiders, carpenter spiders, and vibrating spiders. As with all spiders, they are predators that catch insects or even other arachnids.

When prey gets entangled in its sticky web, the cellar spider binds it in fresh-spun silk and then bites, sucking out its fluids. Afterward, the cellar spider cuts the desiccated insect corpse loose. This is why you will often see a little pile of dry insect bodies underneath a cellar spider's web. Cellar spider webs are also very messy, catching dust or debris in the nearby air.

One thing that makes cellar spiders more unsettling is that if their webs are disturbed at all, they will shake and bounce on the web or immediately jump off of it and run away. They are one of the most active and quick types of web-building spiders. 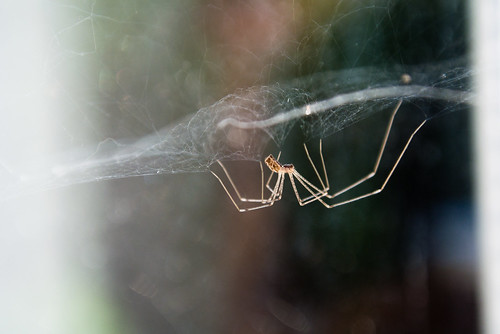 Cellar spiders have very long and thin legs and relatively small and thin bodies. Their legs can reach 2 inches long, and they are usually yellowish brown in color. For the most part, cellar spiders have two sets of three eyes set closely together. Depending on the species, they can have hairy, prickly legs and bodies or smooth ones. A few species, such as Artema nephilit, have bigger, rounder bodies. Many species also have colored markings near the joints of their legs, such as black markings on brown legs or brown markings on tan legs.

Where Do Cellar Spiders Live?

Cellar spiders can be found on all continents except for Antarctica, and there are a variety of species someone could encounter in any single habitat. Cellar spiders usually live in damp and dark places such as caves, abandoned animal burrows, and hollow logs. They are also fond of human habitats such as sheds or basements. They can survive in other areas such as garages, pantries, and — of course — cellars, from which they get their name.

Unlike many other types of spiders, most cellar spiders live in close proximity to their mates. While they do not share a web, a male and female that have mated will usually have two webs very close by.

While cellar spiders do not bite easily and do not have venom, the main issue they cause in households is webbing. Once a cellar spider's web has gotten old and the silk has started to weaken, the spider leaves it behind and spins another one. In a rarely-visited location such as an attic, this can leave cobwebs everywhere, which are a pain to clean up.

In most cases, a homeowner can deal with cellar spiders by clearing out places where they are likely to build webs. Removing clutter from basements or cellars is helpful, and reducing the moisture in certain areas could also encourage the spiders to leave. This could mean fixing a leaky pipe or adding a dehumidifier.

Other helpful tips include:

If these measures don't evict the cellar spiders, professional pest control measures may be the best choice. The team at Bulwark has plenty of experience in dealing with spiders of all kinds and with finding the most thorough and efficient solution based on your home, the infestation's source, and your needs as a homeowner.

How Do Cellar Spiders Reproduce?

Unlike most spiders, which produce tens if not hundreds of eggs after mating, the female of each cellar spider species usually produces a single egg mass with about a dozen eggs inside. The female does not store the egg mass elsewhere, opting instead to hold it under her jaws until the eggs hatch several weeks later.

Is It True That Cellar Spiders Have Dangerous Venom?

No, cellar spiders rarely bite and do not have powerful venom. Most species have no venom at all, as their fangs are too small to effectively deliver it through human skin. This is likely a result of people confusing cellar spiders for daddy longlegs, also known as harvestmen. However, that is still a myth, and harvestmen do not have a poisonous bite at all. The similarity in appearance between dangerous spiders, harmless spiders, and harvestmen likely caused the misconception.

Is It True That Cellar Spiders Eat Black Widows?

Yes, cellar spiders are known to trap other spiders of all kinds in their webs and eat them, and this includes feared species like black widows and brown recluses.

While cellar spiders rarely bite people, their constant web production and tendency to live in groups can cause them to get annoying and take over the darker parts of your home. Contact Bulwark with any questions or concerns, and the team will find the best solution for your home.