The black widow spider is well-known and feared for its poisonous bite. While typically encountered outdoors, they can grow fond of mailboxes, sheds, and even parts of a human house. Don't let these arachnids grow out of control in your home. Take a look at the complete Bulwark guide on how to get rid of black widow spiders, along with useful information about these creatures.

What Are Black Widow Spiders?

The black widow is a species of spider and is thus an arachnid rather than an insect. Like most spiders, males and females build webs by spinning silk in corners or other fitting places. They use these webs as homes and to capture prey, which can consist of flies, crickets, moths, and even small reptiles such as lizards. Once their prey gets entangled in the web, the black widow bites it and injects digestive juices that both kill the prey and liquefy the flesh for easier consumption.

The spiders are technically part of a scientific group called Latrodectus, or widow spiders, which contains brown widow spiders as well. There are 31 species of widow spider in total and five species of black widow in the United States. 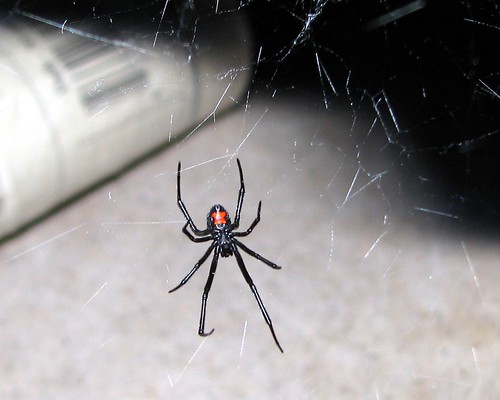 Where Do Black Widow Spiders Live?

Black widows are well-distributed through all relatively warm parts of the world. There are specific species that dominate on different continents, such as the southern black widow in North America, the Mediterranean black widow in Europe, the redback black widow in Australia, and the button spider in Africa.

Black widows are unique in that they tend to build more hectic and less organized webs compared to other spiders. They also build them close to the ground, such as near rocks and logs outdoors or around toilet seats. They do not usually venture far from their webs, and they can be found hiding upside-down, which can show whether they have the red hourglass on their abdomens.

Although black widows are feared around the world for their bite and venom, they only bite when threatened. Although fatalities are rare, the black widow bite is still the most poisonous of any North American spider, however, and it results in extreme pain and cramping at the least. The neurotoxin in the venom is what makes the spiders dangerous, as it can hamper with breathing.

Apart from the risk of bites if they overpopulate, black widows are a normal part of the environment and seeing one every so often, especially in dark or infrequently-visited places, shouldn't be a problem. Only in cases where they have gotten out of control should control solutions be used.

In most cases, a black widow problem can be addressed by simply removing places for the spiders to live on your property. As with all spiders, reducing clutter is extremely helpful. Cleaning up and organizing places like sheds and garages will reduce their hiding spots and force them to build webs elsewhere. Keep outdoor organic material, such as firewood piles, away from your home and on a raised structure if possible.

When clearing spiderwebs, be very careful and check that no live spiders are in the web. You should wear gloves and use a long object, such as a broom, to tear up and gather the webbing from afar.

In some cases, a person's home may be severely infested with black widow spiders, and professional control will be necessary. If you think this might apply to you, the experts at Bulwark can study your home and figure out the best solution.

Black widow venom is 15 times stronger than that of a rattlesnake. Keep in mind that black widows are smaller than rattlesnakes and deliver less venom per bite. All the same, you should be extremely careful around any spider that you suspect may be a black widow.

Why Can't Black Widows Get Stuck in Their Own Webs?

Technically, spiders could get stuck in their own webs. However, black widows, like all web-building spiders, secrete an oily substance on their legs that lets them stay gripped to their web while moving along it.

How Do Black Widow Spiders Reproduce?

Black widows are quite prolific, with a female producing up to nine egg sacs, each with anywhere from 300 to 400 eggs. Once the spiderlings hatch, they remain near the sack for a few days. The hatchlings will eat one another for energy. After a few days, the remaining spiderlings learn to move on their own by releasing a strand of silk that catches air or electric currents, pulling them along and allowing them to move to other locations. This is called ballooning and will be the spiderlings' main source of movement until they grow larger.

Is It True that Black Widow Females Eat Their Mates?

Although black widows are known for the females eating the males after mating, this rarely occurs. In fact, sexual cannibalism between black widow spiders has never been observed in the wild. It has only been seen in laboratory conditions.

Although there are good reasons to be cautious around black widows, they are one of the less common or troublesome pests you may encounter. If you are facing a black widow spider problem, however, contact the experts at Bulwark and get a thorough view on the situation. Bulwark can find the best pest control solution for your home as soon as possible.