You might think that all scorpions are mostly the same, only varying in size and color, but that is far from true. Some families of scorpions are quite unique, including the unpleasant-looking family of whip scorpions. If you've been seeing these creatures around your home or property, check out the Bulwark guide on how to get rid of whip scorpions and everything you should know about them.

What Are Whip Scorpions?

The label "whip scorpions" covers any scorpion that belongs to the family Thelyphonida. Sometimes they are also called vinegaroons, taken from vinegar, because they are able to spit a weak acid mist from their tail ends. The term whip scorpion is sometimes mistaken as the name of a singular species. In fact, there are many species that can be called whip scorpions, each with unique names and traits. Like all scorpions, they are not insects but arachnids, which are eight-legged creatures that share their category with spiders, ticks, mites, and harvestmen.

Whip scorpions are a useful term that distinguishes them from "true scorpions," a term for all scorpions that have the traditional appearance of broad claws and a segmented, barbed tail. Like all scorpions, whip scorpions are predators and survive by catching prey with their pincers, usually smaller insects. While the idea of a whip-like tail may sound scary, their whip-like tails do not have a stinger and are not used aggressively. Their tails are sensory organs that alert them to nearby prey or threats. 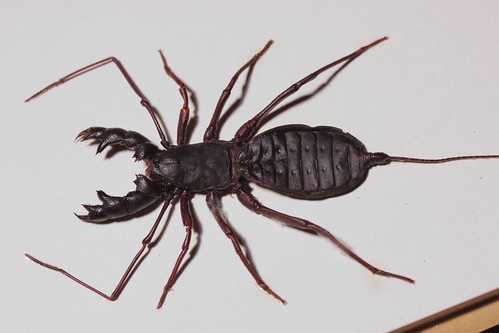 Whip scorpions are one of the smaller species of scorpion, with adults generally reaching up to 3 inches long. Their color ranges from light brown to black. Their chief distinguishing feature compared to other scorpions is their tail, which is very thin and straight.

Like other scorpions, their large pedipalps serve as claws for grasping prey or for defense, although compared to other scorpion families, their claws are relatively small. Also, while true scorpions have a more continuous abdomen, whip scorpions tend to have two distinct body halves: the cephalothorax with the legs and the abdomen with the tail.

Where Do Whip Scorpions Live?

While traditional scorpion species are often associated with deserts and other arid climates, whip scorpions tend to live in tropic and subtropic regions. One exception is the giant whip scorpion, Mastigoproctus giganteus, which is native to arid regions. They are least common in Australia. Europe, and Africa.

Just like all scorpions, whip scorpions are nocturnal and will hide somewhere dark during the day. This can cause them to enter a human home and hide in small, dark places. They can be unintentionally found, however, under debris, in woodpiles, or in cluttered storage areas where they might be resting.

Most whip scorpions prefer to burrow a home of their own in the ground. They will then hide in this burrow during the day, hunt at night, and drag their prey back to the burrow to consume it there. Other species are less picky and might use an object or tight space in a human home as a burrow.

Since whip scorpions do not have a stinger on their narrow tails and do not sting at all, you don't have to worry about them being venomous like with some true scorpions. They also do not bite and will usually flee from people rather than trying to pinch them. However, some species pounce on prey and perceived threats, including humans. While this can pinch slightly at most, it can be very startling and upsetting.

If you see a whip scorpion, however, back away and do not try to kill them or remove them, as they can spray acid from their tail ends. This acid can only cause mild skin irritation or blistering, but it smells very unpleasant and may be difficult to remove from clothing.

How Do Whip Scorpions Reproduce?

Unlike true scorpions, whip scorpions generally lay eggs instead of giving birth to live young. The pregnant female digs a special burrow with plenty of space. In the burrow, the female deposits the eggs and guards them. When they hatch, they do not look like miniature versions of the mother, like in the case of true scorpions. Instead, they emerge from the eggs as larvae and attach themselves to their mother's body with clinging mouthparts. This nymph stage is very brief. After their first molt, they will have the same body structure as an adult, growing as they age.

What Do Whip Scorpions Usually Eat?

Whip scorpions mostly prey on smaller insects, especially crickets and cockroaches, of which they are essential for population control. They also eat millipedes, other scorpions, and terrestrial isopods such as pill bugs. One thing that sets whip scorpions apart is how they eat. They actually have teeth on the inside of the second segment of their pedipalps, which they use to crush their prey into small pieces that fit into their mouths.

While whip scorpions might startle you from how different they look, the truth is that they are not as threatening as true scorpions, which by themselves are not very threatening or troublesome pests to begin with. With that said, whip scorpions can become a household or property pest, and that's when it's important to find a long-term, professional solution. Bulwark pest control experts are ready to hear your story and find the best solution for your home.