Rats are some of the most hated and feared pests in the world. Though they have a bad reputation that they have rightfully earned, they are beneficial to the natural environment. A few ways that they help the ecosystem is by spreading seeds, aerating the soil, and distributing fungus.

As long as rats stay out of your home and off of your property, they are out of sight and out of mind. Once they have invaded your property and infiltrated your home, they become a severe threat that will need to be dealt with. If left unchecked rats can quickly overrun an area, destroying personal property and spreading deadly diseases.

What Are Roof Rats?

Roof rats are aptly named because of their affinity for heights. They can be seen traveling along power lines or tree limbs as a means to reach the roof of your house. They can infiltrate your home through holes as small as one-half of an inch in diameter. If there are no clear entry points for them to enter into your home, they can make their own by chewing out a hole. Other places they will seek to enter your house are through damaged vent covers, cracks, and gaps in shingles.

Roof rats are food hoarders. They will store up food like nuts and seeds for later consumption. These rats are often referred to as citrus rats or fruit rats due to their preference for eating fruits. They are omnivorous and eat a plethora of foods, including grains, nuts, tree bark, meats, seeds, and fruits.

Adult roof rats that are between two and five months can be sexually mature. Females can produce up to six litters in a year with each litter consisting of six to eight young. The average life span of roof rats is around one year in length. When an area is heavily infested with roof rats, they will create a hierarchy where dominant males will mate more often than subordinate males. They are exceptional breeders, and one mature female has the potential to have up to 40 young in a year.

These rats are nocturnal and will bed down in their protected nesting areas during the day. Roof rats' feet are specially designed for climbing. Their pads have developed in such a way as to provide the support and grip necessary for them to climb bush limbs, small trees, overhead power lines, branches, and telephone lines. They are the envy of freestyle climbers everywhere. This climbing ability gives roof rats the advantage over other rat species when it comes to finding nesting areas.

Roof rat nests can be found in piles of wood, vegetation that has grown over fences or utility lines, in piles of trash, in the tops of trees, and thick palm trees. If they can find access, roof rats will invade your home through the attic looking for a nesting area. Houses that have tree limbs hanging over the roof are prime targets for roof rats. When they have gained access to your home, they will seek out the spaces created by soffits, wall voids, and any other spaces that are above the ceiling. 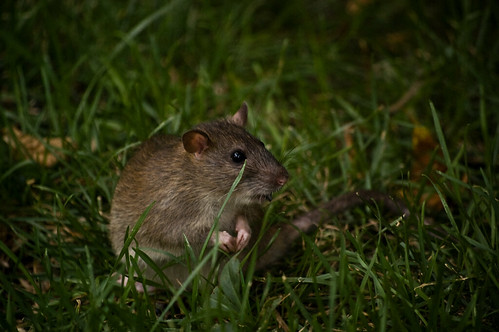 Roof rats, also known as black rats or ship rats, are sleeker and smaller than Norway rats but can grow up to 40 centimeters or more in length. They can be black or brown in color. Roof rats have large ears, pointed noses, large eyes, and long tails. Their fur is smooth, and their tails are hairless. A roof rat's tail is scaly and is longer than their head and body combined.

Where Do Roof Rats Live?

Geographically, roof rats can be found in the lower half of the East Coast and the entire length of the West Coast of the United States. They are also prevalent in the Gulf States. They aren't as adaptable as other rat species and prefer tropical and semitropical climates.

In their natural habitats, roof rats live in vine-covered fences, trees, citrus groves, sugarcane, and rice fields. When invading your home or an industrial location, they still prefer to nest as high as possible but will make their nests in other places if necessary. They have been found living in buildings, rafters, attics, garage storage spaces, roofs, and wall voids.

As with all rats,  a roof rat's beneficial traits for the environment pale in comparison to the hazards they can produce. The primary issue they cause is the potential spread of disease. Though they indeed contaminate the surfaces they travel on with urine and feces and transfer disease through bites, physical contact, and by coming in contact with food, they can spread disease indirectly through fleas, as well. Fleas that have been feeding on these rats can spread the rats' diseases to humans and pets.

Roof rats can spread the plague (still reported in the United States and around the world), trichinosis, food poisoning, rat bite fever, and hantavirus pulmonary syndrome, to name a few. Another problem associated with roof rats is the destruction of personal belongings, food, electrical wiring (sometimes starting fires), clothing, furniture, and much more. They also create an unsanitary living environment due to their urine, feces, and the odors they cause.

Removing tree limbs that hang over your home and keeping shrubbery next to your home trimmed to a moderate height can help to reduce the risk of a roof rat infestation. With modern residential codes requiring that power to the home be run underground, this will also help to limit a roof rat's ability to reach the roof of your home. You should also be aware of any cracks in the foundation or holes in the roof, soffit, or even the walls of your home, and promptly repair them to prevent roof rats from gaining access into your house.

If you find that you are facing a roof rat infestation beyond your ability to defend against, you may want to consider the expertise of a professional pest control agency. A trained professional will be able to diagnose the problem by identifying the pest, implement a plan to eradicate the pest, and put preventative measures into place to help you avoid future intrusions. This can give you confidence in knowing that your family and home are protected from the problems associated with roof rats.