People with gardens, whether for food or decoration, are terrified of the damage that gophers cause. Though gophers as a whole are destructive when it comes to gardening, they are beneficial to the natural environment. They contribute to the health of soil as they carry on with their instinctive behaviors.

Gophers are responsible for increasing the fertility of soil by mixing plant and fecal matter into the soil. The burrows that they create aerate the soil and break up compact soil. The formation of new soil is sped up by gophers as they bring minerals up to the surface. The soil that gophers live in is also able to soak up more water. Gophers are also a staple meal for predators such as weasels, coyotes, snakes, and owls.

It's when gophers move onto your property that they become a nuisance. They can devastate crops and ornamental flowers, making them the arch-enemies of farmers and hobbyists alike. Learning how to get rid of pocket gophers can help to protect your prized garden from destruction.

What Are Pocket Gophers?

Pocket gophers are named due to unique fur-lined pouches that are located in their cheeks. They use these pouches to carry food and materials for building nests. Pocket gophers are digging machines and spend the majority of their lives underground unless they have a hankering for a plant that they can't get to without surfacing. They burrow relatively deep in the ground and create elaborate tunnel systems as they develop nests and forage for food.

A pocket gopher's burrow is made up of the main tunnel that can be from 4 to 18 inches below the surface and lots of lateral tunnels stemming off of it. The main tunnel can sometimes be as deep as 6 feet underground. All of the tunnels of a pocket gopher's burrow averages to around 3 inches across. The majority of the lateral tunnels end in a mound of soil at the surface. Pocket gophers prefer light-textured and fertile soil to call their home.

Pocket gophers remain active all year long and pretty much all hours of the day. They are herbivores and can cause significant damage to crops, flowers, and ornamental plants. They usually feed on the roots of plants and in some cases will pull an entire plant down into their burrows to feed.

Pocket gophers are considered to be solitary animals and have been known to attack humans, cats, and other gophers when their territory is encroached upon. They use their impressive incisors to inflict fairly nasty bite wounds. Their first instinct is to run, but they will defend their nests, especially when they are raising young. There have been cases where a male and a female pocket gopher will share nests and burrows that border on each of their territories but they tend to inhabit their private tunnel systems.

Depending on the species, pocket gophers can have a specific breeding season and only breed once a year or they can breed multiple times throughout the year. The typical litter will have between two and five young but can be higher depending on the species. All of the young are blind at birth and must be cared for by their mother until weaned after about 40 days. Pocket gophers are commonly mistaken for moles or ground squirrels, but they are easily identified when you know their behaviors and what they look like. 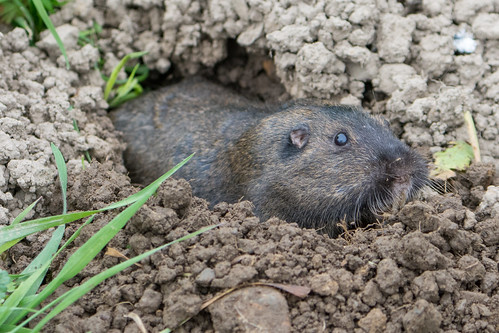 Pocket gophers grow between 5 and 10 inches in length. They have soft, fine fur and are usually dark brown in color. They have specialized front feet with enlarged claws that are perfectly designed for digging and tunneling through soil. Their tails are short and hairless. Pocket gophers have small eyes and small ears in relation to their bodies.

Their whiskers are highly sensitive and well suited for helping them travel underground. Pocket gophers have enlarged incisors used to help to loosen compacted soil, and they can even close their lips behind these incisors to ensure they won't get dirt into their mouths. The fur-lined pouches in their cheeks are used for carrying nesting materials and food.

Where Do Pocket Gophers Live?

Pocket gophers, all 30 something species of them, are endemic to North and Central America. They live underground in intricate and often expansive tunnel systems that can be as deep as 6 feet in places. Some of their tunnels end at the surface in visible mounds of soil. The location of their burrows is determined by the presence of ample food sources and a lack of natural predators.

Not only do pocket gophers make unsightly mounds of soil, but they are notorious for destroying entire crops, flowers, and ornamental plants. Pocket gophers are capable of inflicting wounds on other animals and humans when threatened but will retreat when they can. Outside of the realm of garden and plant devastation they can cause, sprinkler and irrigation pipes and underground cables are often damaged due to their tunneling activities. It is suggested to create a barrier around such hardware with 6 inches of coarse gravel.

There are many ways to control a pocket gopher population but none so effective as obtaining help from a professional pest control agency. Highly trained professionals can diagnose the situation, ascertain the threat, and implement a plan to remove the pest from the equation. Preventative measures will also be set in place to reduce the risk of further infestations.

Other means of controlling a pocket gopher infestation are traps, flooding their burrows, and gopher blasting (this is exactly what it sounds like and involves specialized equipment to cause an explosion in the burrow). If you prefer a more natural remedy and have barn owls living close by, you can encourage natural predation of the pocket gophers by putting up nest boxes for the barn owls. These are just a few methods proven to help eliminate pocket gophers from your property.

If you have identified pocket gophers as the pest that is disrupting your gardening aspirations, you should take action to eradicate them and prevent them from returning. Though they are great for the natural environment, they need to be regulated in developed areas. Learning all you can about pocket gophers will better prepare you for keeping them off your property.