Based on their name, ground squirrels may not sound like a common household pest, but they can be a major threat to both outdoor areas like gardens and your home itself. Take a look at the complete Bulwark guide on what these rodents are, why you don't want them around, and how to get rid of ground squirrels.

What Are Ground Squirrels?

Ground squirrels are part of Sciuridae, a group of mammals that covers all squirrels. Specifically, they include all species that live on or under the ground instead of trees, of which there are many. They are omnivores with a preference for non-animal foods. They will seek out seeds, acorns, and fruits but will also eat mushrooms or insects if they find them. Some species are even known to eat eggs or smaller animals.

Ground squirrels are active during the day, although they still spend most of their time in their burrows, digging to expand the area they can travel underground. The average ground squirrel lifespan is three years in the wild, although they can live much longer in captivity. 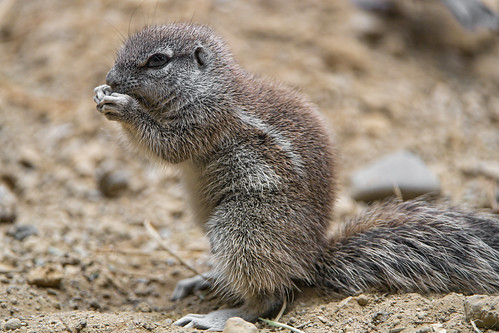 Ground squirrels can be fairly large depending on the species, although they usually fall somewhere between chipmunks and prairie dogs. One trait common to ground squirrels is that their tail is shorter than the length of their bodies. As for color, their pelts range from dark brown to light gray, and their bellies are usually lighter in tone. Their tails are covered in long hairs that lie flat, unlike the bushier tails of tree squirrels.

Where Do Ground Squirrels Live?

Ground squirrels have species thriving on all contents excluding Antarctica and Australia. Antarctica is too cold and devoid of food, and Australia has too many predators and competitors. Species deliberately introduced to Australia by humans went extinct due to the native wildlife.

As you'd expect, ground squirrels generally live underground or as low as they can, often digging burrows in the soil. They are more social than most squirrel types, often staying together in groups.

Ground squirrels may not invade your home, but they can be a serious pest for your garden. They will take bites out of the stalks of any edible or ornamental plants nearby, causing the plant to die. They will also ruin fruits such as tomatoes by eating large portions of them. If ground squirrels burrow near river levees, they can cause them to collapse through tunneling, increasing the risk of floods. Ground squirrels also breed rapidly, and if grown out of control, they can even start to invade parts of a human home, such as garages or dirt-floor basements.

As if these issues weren't enough, ground squirrels are also unsanitary, known for carrying fleas that can spread to pets or even people. They are also dangerous carriers for bacteria and various diseases.

Ground squirrels are a challenging pest to control. Not skittish like rats, they will not be bothered by changes to their habitat or repellant strategies. Trapping, however, is fairly effective if done early, before the population has grown too large.

As noted earlier, these rodents can spread disease. Never handle ground squirrels, live or dead, with your bare hands, and ideally don't touch them at all. Disinfect traps that killed or trapped squirrels before resetting them.

In many cases, a ground squirrel problem will need professional pest control measures to curb population growth and keep ground squirrels away. If your garden or general property is facing damage from overpopulated ground squirrels, don't hesitate to contact the team at Bulwark pest control. The experts at Bulwark have dealt with all manner of rodent infestations, including squirrels, and can figure out the solution that best matches your home, property, and situation.

How Do Ground Squirrels Reproduce?

While many pests birth young in the spring and mate earlier, ground squirrels breed in the spring, producing up to one brood per year of six pups on average. Because ground squirrels tend to stay in communal groups, they are likely to breed as much as possible, causing their population to grow overwhelming.

Can You Tell From Afar if a Squirrel Is a Ground Squirrel?

Which Ground Squirrel Is the Biggest?

The largest ground squirrel species is the alpine marmot, or Marmota marmota, reaching nearly 18 lbs (8 kg). They are well-adapted to cold climates, able to dig more effectively than an ice pick and hibernate for around nine months of the year. They are believed to have evolved during the Pleistocene ice age.

Is It True That Ground Squirrels Helped Spread the Bubonic Plague?

While the average person probably associates the bubonic plague or Black Death of the medieval era with rats, squirrels likely had a role in transmitting the disease. Any animal that serves as a host for fleas likely carried the plague back then and could still carry it today. With that said, people in North America have little to worry about regarding the plague, since modern medicine and human antibodies are far more powerful than back in medieval times.

How Old Are Ground Squirrels?

Based on fossils, ground squirrels are believed to have originated at least 30 million years ago, making them quite young compared to insect pests like cockroaches. It is uncertain where they first evolved, but one theory proposes Europe or Greenland, and that they traveled across what would later become the Bering Straits to North America.

Ground squirrels can wreak havoc on your garden, yard, shed, enclosure, and even your house. If you start to see these pests where they don't belong, be vigilant and take early action before they multiply. Contact Bulwark pest controltoday and take the first steps to identify your pests and evict them.