Are you afraid that fleas have gotten into your home? Before you jump to conclusions, there's a good chance you're dealing with springtails, another tiny jumping pest. Let's go over how to get rid of springtails and everything you need to know about them.

Springtails, also known as collembolans, are six-legged omnivores that usually feed on decaying plant material, algae, and fungi. Despite their tiny size and bug-like appearance, springtails are not technically insects. They break down dead plant matter and spread fungal spores, which helps keep plants healthy, and since they eat fungi as well, they are good balancers for the ecosystem.

These creatures are named for a forked, tail-like body part called a furcula, which extends from the tip of the abdomen under the body toward the head. The purpose of the furcula is to make the springtail leap away when threatened, hence the name. Some species can jump as high as six inches in the air. However, they only use this to escape a perceived threat, because they cannot accurately control where to spring. This is important to their survival, however, as they have poor eyesight and cannot move quickly with their legs. 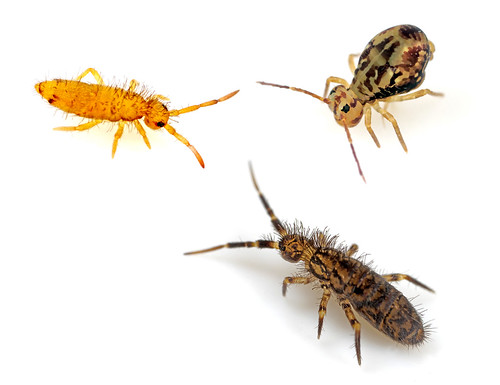 Springtails are very small, no longer than an eighth of an inch as adults, with most closer to a sixteenth of an inch. Depending on the species, their appearance varies wildly, but all specimens have long, rice-grain-shaped bodies or fatter, tick-shaped bodies. Their coloration ranges from black to gray, brown, yellow, or even white. Unlike fleas, they have two long antennae and lay flat to the ground.

Most people don't recognize springtails based on their individual appearance. Instead, you are more likely to notice a mass of them near a water source. From afar, people sometimes mistake springtails for tiny ants, until disturbing them and seeing them leap in all directions.

Where Do Springtails Live?

Springtails prefer moist conditions and will live near dead plant matter, such as decaying logs near rivers or ponds, or in moist leaf mold. Compared to other pests, they are fairly tolerant of cold. They are sometimes called snow fleas, as they can be found on melting snow cover in early spring. They will usually go toward the easiest source of water, such as swimming pools, and can appear in vast numbers within days.

The main issue with springtails is if they move into parts of your home, as this likely indicates a consistent source of water that you need to deal with. Homes that suffered flooding and water damage often develop a springtail infestation if the moisture isn't completely removed.

In some cases, springtails are believed to cause allergies and dermatitis. They are also a common farm pest, as some species are fond of eating fresh plants. By and large, however, springtails are not dangerous or problematic. Instead, they are a nuisance and a sign that your home has a moisture problem. While tiny, their colonies grow rapidly and can number in the thousands, leading to a nasty mass of hopping, tiny flea-looking pests.

The most important solution for killing off a springtail infestation is by curbing the easy water sources in your home. Anything that is perpetually moist should be removed or addressed.

One common source of springtail infestations is moist mulch or soil beds in direct contact with the outer walls of your home. If possible, try to create a barrier between this moist material and your home's foundation. Keep leaf litter, old wood, etc. away from your home's walls and keep your rain gutters clean. For pipes that enter your home from outside, make sure they aren't leaking water.

As for indoors, you'll most often see springtails near consistent water sources, like under sinks or in bathrooms. If you see springtails under baseboards or from under the floor, your home's foundation could have a moisture issue that needs addressing.

In the case that these solutions don't fix the problem, or you don't have time to fix moisture issues promptly, professional chemical treatment may be the final step to evict springtails from your home. The experts at Bulwark are able to address troublesome and tiny pests like these in a way that suits your home and family.

Do Springtails Have Any Other Unusual Body Parts?

As noted before, Springtails are also called collembolans. This comes from Collembola, a combination of the ancient Greek words for "glue" and "peg". The name comes from an organ on the middle underside of the springtail called a collophore, which was believed to help it stick to surfaces. Today, scientists believe the collophore is for balancing water intake, absorbing or excreting water as needed.

Is It True that Springtails Can Jump Off of Water?

Yes, Springtails are so small that some species can not only walk and maintain surface tension on still water but leap off of it with the furcula. Some species have shorter furcula with weaker leaping capability, however, so this doesn't apply to all springtails.

Are Springtails Parasites That Feed on Humans?

No, there is no clear scientific evidence supporting the idea that springtails feed on humans. This is likely a misunderstanding caused by their scales irritating human skin, or people mistaking fleas for springtails. There are even unsupported claims that the U.S. government used them as a biological weapon, but this makes no sense as they do not carry harmful diseases. Although contact with them may cause a rash due to their scales, they do not bite, suck blood, carry dangerous diseases, or otherwise pester humans.

Springtails may not be as dangerous or troublesome as cockroaches or ants, but you shouldn't have to tolerate them where you live. If you think you're dealing with a springtail problem, complete our easy home assessment form to describe what you've seen. Our team will get back to you as soon as possible to diagnose and resolve the pest problem, guaranteed.