If you have ever accidentally stumbled upon a yellow jacket's nest, you know firsthand how unpleasant the experience can be. Yellow jackets will fiercely defend their nests from potential or immediate threats. They attack in force and have the potential to be deadly, so it is important to take measures to protect yourself and your family.

Though they are aggressive when defending themselves from threats to their nest, yellow jackets can be somewhat beneficial to have on your property. They feed their young insects that are known to damage ornamental plants and crops. If you grow vegetables and have ornamental plants as part of your landscaping, yellow jackets can offer you free pest control. However, finding the balance between the benefits and dangers that yellow jackets pose can be difficult, so you should proceed with caution.

What Are Yellow Jackets? 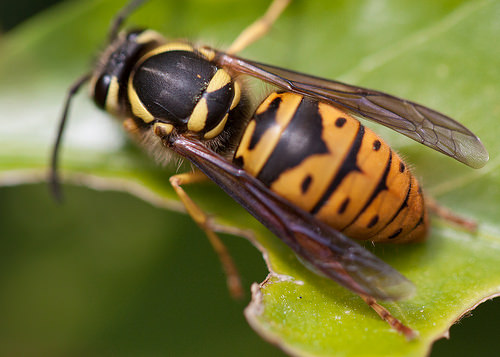 Yellow jackets are an aggressive species of wasp. They are very beneficial in the process of pollination and have a varied diet. They hunt and kill other insects, such as flies and beetle grubs, and bring them back to their larvae. In the larval stage of their development, they consume protein. Adult yellow jackets prefer sugary foods like fruit, flower nectar, and even soda when it is made available to them.

When hunting or scavenging for food, yellow jackets aren't apt to sting, but they are very territorial and will brutally defend their nests from threats. They can sting multiple times and have no fear despite their small size.

Yellow jackets can be identified due to their small size and bright yellow and black coloration. They average 10 to 16 millimeters in length. Although the distinctive black and yellow coloration is most common, they can also be black and white. Their wings match the length of their bodies and are positioned laterally to their bodies when the wings are at rest.

Where Do Yellow Jackets Live?

Yellow jackets are dispersed throughout the world, with at least 16 different species in the United States alone. Variations in their black-and-yellow patterns allow for separate species of yellow jackets to be recognized. They are considered to be social insects and reside in annual colonies. In harsher climates, the queen is the only yellow jacket to survive the winter and will reemerge in the spring to create a new nest. The queen will then initiate the nest, and female workers will build the nest, forage for food, and care for the young.

A yellow jacket nest can grow to contain thousands of female workers. During late summer to early fall, males will be born, and mating will happen. Once mating is over, fertilized queens will seek out a protected area where they can ride out the winter. In warmer climates, colonies can live through the winter and continue to grow in size.

Depending on the species, the queen will either choose an underground or aerial location to nest. Nests that are located above ground are constructed of a paper-like material consisting of cellulose that has been chewed. These nests have a grayish tone to them and can be easily identified as a yellow jacket nest. They are often attached to trees, the eaves of houses, wall voids, attics, or bushes.

Yellow jackets are attracted to meats, sweets, and leftover food. They can be a nuisance when they have taken up residence near outdoor social areas or open trash bins. They aren't known for causing structural damage, but they can chew through drywall as a means to enter your home, causing unsightly cosmetic damage. Once they have created a nest indoors, they can be hard to deal with, as they will aggressively defend their nests.

Although their sting is extremely painful, yellow jackets do not pose a severe threat to those who are not allergic to their venom. However, people who are allergic to a yellow jacket's sting are at risk of dying if they are not treated shortly after an attack. Also, those who are not allergic may gain a heightened sensitivity to their venom after being attacked, which could complicate things if they are ever stung again. Your best bet is to avoid being stung when possible.

Keeping your home in order by cleaning up food, food crumbs, and other messes that may attract yellow jackets is one of the best steps you can take to prevent them from entering your home. You should also keep indoor and outdoor trash bins clean and covered to prevent yellow jackets from causing problems in those areas. If you choose to attempt eradicating a yellow jacket nest on your own, insecticide sprays and dust are available for use.

Treating the nest at night when the entire colony has returned from their daily routines will be the most effective approach. After using the spray, dust should be used to prevent any further activity in the area of the nest. If there is still activity at the nest the next day, you may have to repeat the treatment several times until you have killed all of the yellow jackets.

Finding and eliminating yellow jacket nests earlier in the summer is best, as their colony won't be as big then as it will be near the end of the summer.  Another advantage of eliminating them sooner rather than later is that you will be able to prevent the production of males. This will prevent the yellow jackets from mating, helping to curb the number of fertilized queens in the coming year.

When contemplating how to get rid of yellow jackets, it is best to consult a professional pest control agency. Expert technicians can identify and neutralize the threat by utilizing methods that have been proven to eliminate yellow jacket infestations. They have the protective equipment and specialty training necessary to combat this aggressive species of wasp.