Wasps can be a danger to humans, especially if you are allergic to the venom they inject during a sting. The sheer volume of stings that could be delivered by a large nest of wasps could prove to be fatal as well. Wasp nests are relatively easy to spot, so they can be easily avoided unless they have created nests your porch, attic, or other areas of your house.

Though wasps are generally viewed as a negative, they do offer benefits that you may not be aware of. Wasps help with pollination — not quite as much as bees, but enough that they can make a difference. They also hunt and kill other insects that are harmful to gardens and flowers.

What Are Umbrella Wasps? 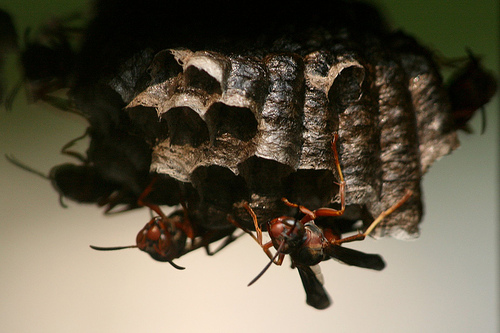 Umbrella wasps are a species of wasp in the United States that creates an upside-down nest. These nests are usually located under the eaves of houses, under covered porches, or even indoors if the wasps can find their way inside your home. They are aggressive and will defend their nest and from any perceived threat. Their sting delivers a potent venom that some people are highly allergic to, and one sting could be fatal under the right circumstances.

Umbrella wasps are social insects and live in a colony that ranges in size from just a few wasps to 800 or more per nest. The nest is constructed from wasp saliva, wood, and chewed cellulose and is attached to a surface by a small stem-like structure that is surprisingly sturdy. They also contain individual cells, large enough to be observed, where eggs are laid.

In the fall of the year, the whole colony of umbrella wasps will die out — except for females that have mated. They will find a protected location and hibernate through the winter. In moderate climates, umbrella wasp colonies don't die out, and if left undisturbed, they will continue to multiply and grow into massive colonies.

In less-than-favorable climates, fertilized females will come out of their protected location after winter and find a place to build a new nest. A popular belief is that old nests left over from previous years are reused, but this is not the case. The new queens will lay eggs and tend to the young until they reach adulthood. These sterile workers will then begin to care for the nest, the colony's young, and the queen.

Umbrella wasps have four stages of life: egg, larva, pupa, and adult. The adult workers provide a steady source of protein for their young that consists of other insects. In the fall of the year, reproductive males and fertile females are produced and then reproduce. After the act of mating, the males will die, and the fertilized females will seek out a safe place to ride out the winter and then start the cycle all over again when spring arrives.

Adult umbrella wasps typically eat sugary foods such as plant nectar, honeydew, or soda when readily available. If these types of foods are left out in your home, they may be drawn inside when foraging for food. This can cause considerable problems for you and your family if an infestation is left unchecked.

Umbrella wasps come in a plethora of different colors that include yellow, orange, black, and reddish brown. They can measure up to 1 inch in length and have two pairs of wings, six legs, and two antennae. Unlike bees, umbrella wasps have a distinctive pinched waist and no hair on their legs. Though they are considered small in the grand scheme of things, they are quite resilient and will fearlessly defend their nests.

Where Do Umbrella Wasps Live?

Umbrella wasps are found around the world and are extremely common in the United States. With the unique structure of their nests, they can live practically anywhere that is sheltered. You will often find them nesting under the eaves of houses or in covered porches, wall voids, attics, garages, or trees. Regardless of where they decide to live, they will aggressively defend their home from all intruders.

Umbrella wasps can cause havoc when left unchecked. When undisturbed, they have the potential to build reasonably large nests numbering close to 1,000 worker wasps. For people who are allergic to wasp venom, there is a real possibility of their stings being fatal. Those that are allergic to wasp stings can go into anaphylactic shock, which can be deadly.

Even if you aren't allergic to their defensive attacks, umbrella wasp stings are very painful and can hurt for 24 hours or more and then itch as they heal. Being attacked by wasps is no walk in the park. These stings can also cause your pets to suffer if they are unfortunate enough to disrupt a wasp nest.

Umbrella wasps are legendary for interrupting BBQs, picnics, outdoor parties, and swimming or just keeping you from relaxing on your front porch. They cause terror in kids and adults alike, and they can make an unsightly mess where ever they happen to be nesting.

During the summer months, it can be a chore to keep these unwanted guests away from your home, but it can be done as long as care is taken to prevent yourself from suffering a vicious sting. Removing small nests may be more manageable for individuals who like to do pest control for themselves. The advisability of a DIY approach will also depend on the location of the nest and whether you have the proper means of reaching it.

If you feel that you are not able to eliminate a wasp infestation without the possibility of being stung, you may want to have a professional pest agency take care of the problem for you. Trained exterminators have the proper training, tools, and equipment to eradicate umbrella wasps and remove their nest safely. Once the threat is eliminated, they can also implement a plan to prevent further infestations.

Although there are positives to having umbrella wasps on your property, it isn't wise to forget about the threat they pose to those who may be highly sensitive to their venom. Your goal should always be the safety of yourself, your family, and your pets when dealing with wasps. Learning how to get rid of umbrella wasps is an important step toward providing a safe and secure living environment indoors and outdoors.