Bees are often seen as beneficial insects when they're found in the right environment. However, carpenter bees often invade in areas where they're not wanted. Learn more about what you can do if you're dealing with this pest.

What Are Carpenter Bees? 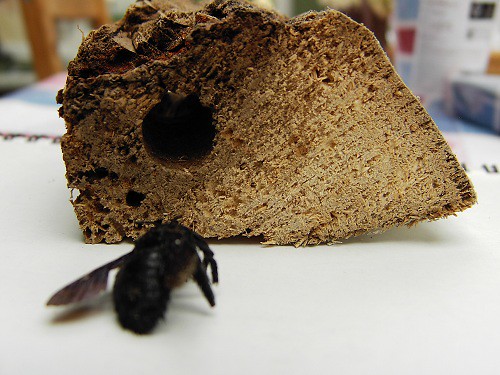 Carpenter bees are a nonsocial species which drills holes in wood to nest. Though you might initially mistake them for bumblebees, this is a very different type of insect.

Carpenter bees are similar to bumblebees in size, but they have a shiny, black, hairless abdomen as opposed to the fuzzy striped abdomen of the bumblebee. Eastern carpenter bees have yellow hair on the thorax, while other species such as the California carpenter bee and female valley carpenter bee have a metallic appearance. About an inch in length, carpenter bees are difficult to miss. This is one of the largest native bee species in the United States.

Carpenter bees aren't as social as honeybees or bumblebees and don't have a queen. They are not considered to be social insects, but small groups of carpenter bees may live near one another. Because these bees may live alone, you can't rely on a buzzing swarm of bees to alert you to an infestation. You'll need to look for more subtle signs of a problem.

Where Do Carpenter Bees Live?

Carpenter bees are found along the eastern United States up through New York state, and across the southern part of the country from Florida to Arizona. Carpenter bees build their nests in wood. They may choose fence posts, railings, windowsills, telephone poles, roof eaves, doors, and even wooden furniture. They prefer wood that's untreated and at least two inches thick.

The female carpenter bee will typically drill its first hole against the grain of the wood. The bee then tunnels into the wood. After reaching a depth of about an inch, the bee makes a 90-degree turn and begins tunneling with the grain of the wood, creating chambers for her eggs. She works back to front shaping about five to eight cells. She will provision these cells with pollen and lay a single egg in each one. The bee then seals off the cells with regurgitated wood pulp.

The larvae hatch in these cells and feed on the stored pollen until they reach maturation. The bees will then return to the tunnel for hibernation in the winter. In spring, they mate again and either clean out old tunnels or create new ones.

Male carpenter bees do not sting. Females, though capable of stinging, rarely do so. The male can be quite alarming, however, as he will hover near anyone who threatens him and may repeatedly dive to scare away anyone he deems a danger. Though it's unlikely that you'll suffer stings from carpenter bees, they can still do a significant amount of damage.

Carpenter bees can live for up to three years, producing one or two generations each year. Female bees may nest with their mothers. It's also possible that several related females will create their nests close to one another. A series of carpenter bee nests can create serious structural damage. Once excavated, these nests create a prime spot for rot and decay to occur as moisture makes its way into the wood.

It's important to explore how to get rid of carpenter bees if you have an infestation in your home. Working with a professional exterminator will help you identify and address the problem properly. Carpenter bees aren't the only insects that may use these types of nests. In fact, other insects may use abandoned carpenter bee nests for shelter, exacerbating your problem.

The best way to get rid of carpenter bees is to take a two-step approach to the infestation. First, your exterminator should apply an insecticide to the hole. After the bees have had time to come into contact with the insecticide, you should plug the hole with a piece of a dowel rod coated in putty, glue, or another sealant.

An insecticide applied to the surface of the wood can discourage carpenter bees from creating new nests in an area. This type of application will typically last for three to four weeks.

You can deter carpenter bees from nesting in your home or furniture by treating and painting the wood. This makes it less desirable to them. You can also set up carpenter bee houses that have pre-drilled holes for the bees to use. The bees will typically choose these homes over yours when given the option.

Carpenter bees are fascinating creates that should not be considered categorically bad. While you will need to figure out how to get rid of carpenter bees if they're in your home, they can be a welcome neighbor when they live nearby.

Carpenter Bees are Found Around the World

There are more than 500 species of carpenter bees worldwide. However, only five of these species live in the United States.

Carpenter Bees Can Be Beneficial

Carpenter bees are often considered beneficial because they pollinate many different crop and non-crop plants. Because there is little threat of them attacking, they only need to be exterminated if they are nesting in your home.

Understanding both the benefits and hazards of carpenter bees will help you identify the best way to handle them around your home. If you suspect carpenter bees, speak with a pest control professional to explore your options.