The Jerusalem cricket has a very distinctive appearance that's likely to catch your attention the first time you spot this type of insect. Learn more about this cricket and how you should handle any issues with it in your home.

What Are Jerusalem Crickets? 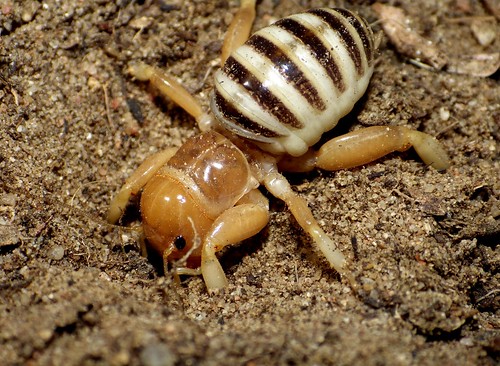 Jerusalem crickets are flightless insects that bear a resemblance to other crickets yet have a much larger body with fatter legs. They are also known commonly known as potato bugs. Other names for this insect include “child of the earth” and “skull head.”

About an inch long, Jerusalem crickets are easy to see when you turn one up. However, they prefer to remain hidden, so you might not spot them often. These insects are primarily tan, brown, or red, but they have a large bulbous abdomen with dark stripes. They have a big head with two distinguishable eyes beneath long, thin antennae.

These crickets have six spiny legs. The front legs are particularly thick and enable them to dig in the soil. Though their back legs are large, they are not strong enough to propel long jumps. Their jaws are quite big and powerful. Females have a larger abdomen than males with a smaller head and thorax. The males are generally larger overall. However, females may eat males after mating.

At first glance, Jerusalem crickets are sometimes mistaken for spiders. However, closer examination will reveal that these insects have fewer legs than a spider as well as two distinct eyes.

Where Do Jerusalem Crickets Live?

The Jerusalem cricket is found in the western United States and Mexico. It spends most of its life underground, burrowing beneath the soil. You may find them under rocks or in loose, sandy soil. They drag their abdomens along the ground when they walk, so you might identify the trail of a Jerusalem cricket before you see the cricket itself.

These insects are considered nocturnal, though they have been spotted during the day. They're usually seen only when they're disturbed. Farmers may find them when tilling the soil or digging in manure heaps. Jerusalem crickets prefer dark, damp areas. In desert areas, Jerusalem crickets are sometimes seen along the roadside. This is likely because they emerge from the sand at night but stop at the pavement, resistant to cross.

Though they don't typically attack, Jerusalem crickets can deliver a nasty bite if they're disturbed. These insects have jaws that are strong and sharp enough to draw blood. You should avoid picking these crickets up. When they're residing outside the home, Jerusalem crickets are not a cause for concern. They're not aggressive to humans and don't generally damage the home.

Though there's a common myth that Jerusalem crickets are poisonous, this simply isn't true. A bite from this insect may pinch, but it does not deliver any venom.

It's unusual for Jerusalem crickets to cause major crop damage. They have done damage to some commercial potato farms due to their preference for the underground tubers of this crop. In residential areas, the occasional Jerusalem cricket is not a cause for concern.

If you have a large number of Jerusalem crickets in your home, the infestation can be quite unsettling. The most troubling aspect of this problem is simply the prominent sight of the crickets. If these insects get into your kitchen, they may feed on a variety of foods including bread and produce. Feeding on plants outside the home, they may do a moderate amount of damage to the garden.

If you're concerned about an infestation of Jerusalem crickets in your house, contact a pest control professional to come up with a smart plan of attack. This will begin with proper identification. An experienced exterminator can make sure that you are in fact dealing with Jerusalem crickets and not another type of insect.

Next, you need to identify points of entry around the home. This is another task that a professional can assist with. Sealing cracks and gaps around your foundation, doors, and windows will help you prevent Jerusalem crickets and other insect invaders from getting into the home.

A well-trained pest control professional will help you understand how to get rid of potato bugs if this is necessary. It's often easier to physically remove Jerusalem crickets than to use a chemical treatment method. However, every case is unique, and the best pest control professionals are those that pay careful attention to the situation in your home.

Jerusalem crickets can be alarming, but they are very interesting creatures when you examine them more closely. Learn a bit more about this type of strange-looking cricket.

Jerusalem crickets can communicate in a number of ways. If startled or threatened, they will hiss aggressively. Moving about, they might make scratching noises. When mating, the male will drum his abdomen on the ground. This creates vibrations in the soil that are detected by the female. There are over 20 species of Jerusalem crickets in the United States, each with their own unique drumming call. Unlike actual crickets, the Jerusalem cricket does not chirp.

Due to their large size, Jerusalem crickets are occasionally pursued as pets. They can be kept in a terrarium that's equipped in a manner similar to their native environment. They prefer loose, lightweight soil that's loamy or sandy for burrowing. Rocks and pieces of wood can be added for additional hiding places. These insects need a water source and plenty of food. They are omnivorous and will eat vegetables, fruits, meat, bread, and smaller insects.

If you're concerned about a Jerusalem cricket infestation in your home, contact a pest control professional to learn more. An exterminator can help you best understand the scope of the problem and the best way to approach it. It's uncommon for Jerusalem crickets to be a major pest, but you should address the problem promptly if you have several of them in the home.