If you spot black crickets hopping around your home, they're likely field crickets. These can become a pest when they invade in large numbers. Learn more about what field crickets are and how you should respond to them in your home.

What Are Field Crickets? 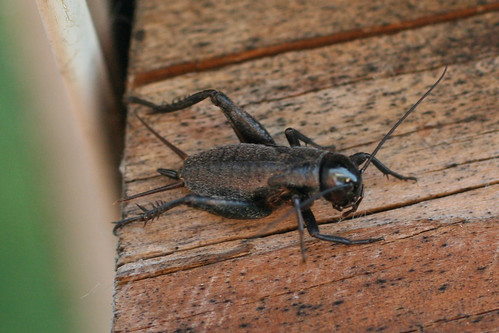 Field crickets are a common insect that can appear in many parts of the United States. They're most easily identified by their chirping sounds. The male cricket can chirp up to 30 times a minute when trying to attract a female. Though they're not a physical danger to humans, field crickets can be a nuisance.

There are many species of field crickets, but these are almost identical in appearance. These insects are distinguishable only by their calling songs. Field crickets are black or brown in color. They are fairly large, measuring about 1-1/2 inches in length. They have six legs including two long, powerful hind legs that help them jump quickly. They have large hind wings as well, though not all field crickets can fly.

Male field crickets have specialized forewings that they use to make their distinctive calling sounds. Males sing courtship songs to females and make a fight song when encountering other males. The females of the species don't make any sound.

Where Do Field Crickets Live?

They prefer to live in shallow burrows on top of the soil level. You can find them in forests, fields, caves, and lawns. Field crickets may also live in outhouses, basements, and homes. They prefer areas with moisture. In the house, you're likely to find them around plumbing.

Outbreaks of field crickets usually happen in spring and summer as they take to the air on their nocturnal mating flights. Each year, a female cricket can lay 150 to 400 eggs. These eggs stay hidden in the soil through winter and hatch in the spring. It takes about three months for newly hatched crickets to reach adulthood.

When crickets are found in manageable numbers, they can actually be beneficial. Field crickets feed on eggs and pupae of other insects and may help to control some pests. However, these crickets might also munch on plants in your garden.

In large numbers, crickets are a major nuisance. They prefer to be outdoors and are usually accidental invaders in the house. They're drawn to lights and may create unpleasant swarms around lighting, particularly during their mating season. One report shared by Oklahoma State University highlights the scope of the potential problem stating that during one invasion “the streets beneath bright lights were black with crickets, sides of buildings were completely covered… and some streets were hazardous for driving due to the slipperiness caused by crushed crickets.”

In the home, crickets might chew on leather products, rubber, plastic, wood, and fabrics. They're particularly attracted to fabrics that are soiled by sweat or food. They do not harm people but can be quite startling as they jump up when disturbed. The noise that male crickets make can add to the disturbance. If field crickets get into the house, the volume of their chirping can make it difficult to sleep.

If you have a significant number of field crickets around your home, you may need to speak with a pest control professional about the best way to address the problem. An experienced exterminator can make sure you've properly identified the pest you're dealing with and recommend the best ways to tackle the problem.

A pest control professional can help you eliminate infestations around the home. He or she can also use a chemical application around the house to prevent cricket infestations in the future. This is usually applied to the area directly surrounding the house, including the patio, foundation, and surrounding flower beds.

Eliminate hiding spots for crickets so they don't have a convenient place to retreat during the day. They will look for piles of stones, wood, and debris around the house. Weedy areas or those with dense vegetation are likely to hide crickets in the daylight hours as well. You can keep crickets from entering the home by sealing any gaps, cracks, or holes around windows and doors. Caulk and weather stripping will help secure these areas.

Field crickets are fascinating insects that can actually be useful in the right situation. They're not always a problem and may, in fact, present a solution in some cases.

Some people seek out field crickets intentionally. This species is often used as food for reptiles or pet tarantulas. Anglers might use field crickets as fishing bait. If you're shopping for crickets in a tackle shop or pet store, this is one species that you might find.

Field Crickets as a Meal

In many countries, field crickets are considered an edible treat. Over 2 billion people around the world eat bugs. A 2013 report released by the UN and FAO identified insects as a promising sustainable protein source to help feed the 9 billion people expected to populate the earth by 2050. They're a good source of protein and can be eaten fried or roasted. You might even find crickets in candies like lollipops and chocolate.

Compared to beef, crickets have more protein per gram. They're also a better source of zinc, iron, Vitamin A, calcium, and B12. While it takes 1,700 gallons of water to get a pound of beef from the farm to the table, it takes just one gallon of water to produce the same amount of cricket protein.

If you have a field cricket infestation around your home, a pest control professional can help you evaluate the problem and come up with the best solution for your needs.