Though all creatures on Earth are supposed to have a purpose, some seem to be here so they can be pictured in the dictionary beside the word "pest." A tick is unquestionably one creepy crawly that will leave you scratching your head as to why it exists, but ticks do serve a reasonably significant role within the ecosystems where they reside. They are studied as disease vectors by scientists and provide a food source for many animals.

Generally speaking, ticks are blood-sucking parasites that carry and transmit a large number of diseases. When you have dogs that spend time inside, you are more likely to run into these tiny pests. Otherwise, if you are an active person who loves the outdoors, you may find that you have picked up a tick while enjoying some time hiking, camping, or working in your yard. Learning about the behavioral traits of ticks is an excellent way to know how to handle them.

What Are Dermacentor Ticks? 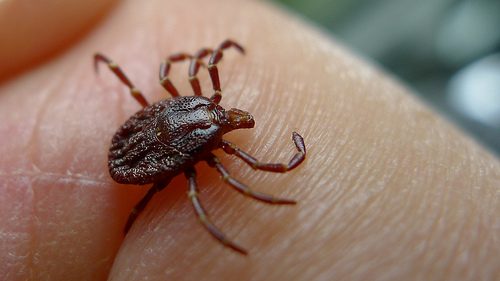 Many people consider ticks to be insects, but they are actually arachnids. Yes, they are related to spiders and scorpions. They feed on the blood of domesticated dogs, wild animals, and humans. About 30 species of ticks make up the dermacentor tick genus. All are classified as "hard ticks."

Hard ticks feed on birds, reptiles, and mammals, including domesticated animals and humans. Hard ticks are encountered more often by humans due to them hitching rides on pets. A hard tick begins its lifecycle as an egg. Then it passes through three stages, progressing from a larval stage to a nymphal stage before maturing into an adult. An adult female tick can lay thousands of eggs.

Ticks feed on blood no matter the stage of life they are in. When in the larval and nymphal stages, hard ticks will typically feed on smaller mammals. When they have fully matured, they will seek out larger prey to feed on, such as your dog or even you if given the opportunity. Tick bites can cause some discomfort, but just the bite alone is not that serious. It's the diseases ticks carry that are of great concern.

In the larval stage, ticks only have six legs. In the nymphal and adult stages, they have eight legs. The color of ticks varies depending on the species. Adult ticks can be the size of a sunflower seed or even smaller, but when they are engorged with a host's blood, they can be over a centimeter in length. Tick larvae are usually less than a millimeter in size.

One misconception about ticks is that they embed their entire heads into the skin of their hosts. This is not true. They only insert their mouthparts into the skin. They then inject anti-clotting agents into the skin while feeding. Once a tick sets its mouth into place and begins to feed, it can be somewhat difficult to dislodge.

When you notice a tick on your skin that has attached itself and is feeding, you will need a few things to remove it. You will need to have a disinfectant, such as rubbing alcohol, and a good set of tweezers. You should press the tweezers down on the tick as close to its head as possible and pull up with even pressure until the tick releases.

When removing a tick from the skin, its mouthparts may break loose from its body and remain lodged in the skin. However, the mouthparts can be extracted with tweezers. Once you have removed the tick, you can kill it by freezing it or submerging it in alcohol. After the tick has been discarded, you should use rubbing alcohol to disinfect the bite area as well as your hands and the tweezers. If you fear that you have contracted an illness from a tick bite, you should seek medical treatment immediately to ensure your health is not at risk.

The American dog tick is the dermacentor tick that has the most human interaction, and this is due in part to what its name alludes to. Dogs are a popular pet, and many of our furry friends spend just as much time indoors with us as they do outdoors. Because of this, they can unknowingly introduce ticks to the inside of our homes.

The most common disease that this tick can spread is Rocky Mountain spotted fever. The symptoms that accompany this sickness are lack of appetite, nausea, muscle pain, and fever. If left untreated, Rocky Mountain spotted fever can be fatal. Other diseases that this tick can transmit are Colorado tick fever, encephalitis, Q fever, tularemia, and tick paralysis.

Ticks are numerous and are known to infest areas rather quickly. It's best to simply avoid areas that are overrun by ticks. However, if you do need to venture into a tick-infested area, you can take certain steps to decrease your odds of being bitten:

Prevention of ticks around your home can be as easy as keeping your yard and property well manicured. In some cases, ticks are introduced to your home by other household pests, such as mice, and you may need to treat for more than one pest at a time. In these instances, trained professionals can diagnose and resolve the underlying problem.

Having a working knowledge of how dermacentor ticks behave can help you stay vigilant when enjoying time outdoors. When you believe that you, your family, or your pets have been exposed to ticks, taking the time to search for ticks is always a good habit. Follow the tips above to get out there and conquer your next outdoor adventure while staying tick free.