Many dog lovers have encountered a Rhipicephalus tick, better known as the brown dog tick, at some point in time. These ticks are an invasive species of tick that plagues domesticated animals and humans worldwide. Rhipicephalus ticks are considered to be the most common tick, and they get their name from their preference of feeding on dogs. These eight-legged critters consume the blood of their hosts and can spread diseases as they feed.

The brown dog tick, in particular, is a menace to civilization. They deliberately invade areas where humans live and proceed to feed on domesticated animals and even humans when the opportunity presents itself. Understanding how the brown dog tick survives will be of great importance if you find yourself facing a Rhipicephalus tick infestation.

What Are Rhipicephalus Ticks?

Rhipicephalus ticks are a blood-sucking parasitic member of the arachnid species, making them even more intimidating than they already are. They can be found through all seasons of the year and can live for up to 18 months without feeding. This makes them a year-round threat for you and your pets.

Although their preferred hosts are dogs, brown dog ticks will feed off of other mammals and humans when pressed for food. Females will feed for a solid week and become engorged on a host's blood before releasing from the host to digest the meal. Once the female has digested the blood, she is capable of laying up to 5,000 eggs. These eggs will be laid on ledges, in or around houses, or on top of dog kennels.

Brown dog ticks hatch from their eggs within two to five weeks and emerge in their larval stage with only six legs. They will continue to mature and pass through the nymph stage, obtaining their two other legs, before turning into an adult that is capable of mating. 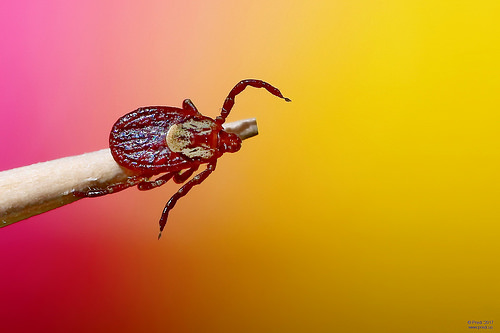 Brown dog ticks have a flattened body that is thinner in the front and significantly wider at the posterior end. They have a pitted surface over the top of their bodies and are brown in color. The male tick will be a darker reddish-brown color, while the female tick is light reddish brown in color. They will also have a distinguishable head, and as all arachnids, the adult ticks will have eight legs.

Adults that have not fed on blood are roughly an eighth of an inch long. After a female has fully engorged herself, she can measure up to a half inch in length and will be blue-gray in color. Males are distinguishable by having a slightly darker color, and they are smaller in size than the females.

Where Do Rhipicephalus Ticks Live?

Brown dog ticks are disbursed throughout the entire United States but are found in higher concentrations in southern states. They are known to infest areas where humans have settled. They will invade your home, animal pens, and dog kennels. This species of tick is fully capable of spending its entire life indoors, including during the mating and egg-laying processes.

With their ability to lay thousands of eggs, brown dog ticks will quickly overrun an area. You could have a very serious situation on your hands before you even know you have a problem. As a preventative measure, you should always inspect your pets for ticks before letting them enter into your home.

Brown dog ticks are a huge problem for dog lovers. These ticks prefer dogs as hosts over all other animals. Your dogs are most susceptible to these ticks if they are kept in outdoor kennels. If your pets spend any length of time outside and they are brought inside, you are at risk of having your home infested with brown dog ticks.

Since they are capable of living and breeding indoors, rhipicephalus ticks can become a serious threat to you, your family, and your pets. Brown dog ticks, like many other ticks, carry many diseases that can be deadly to both dogs and humans. A couple of the canine-related diseases these ticks carry are babesiosis and canine ehrlichiosis.

Though they are not known to transmit Lyme disease, brown dog ticks are often mistaken for deer ticks, which do carry Lyme disease. Brown dog ticks are known for transmitting Rocky Mountain spotted fever to humans, and this can be a fatal disease in severe circumstances. If you or a family member has suffered a tick bite and you are uncertain of what kind of tick it was or whether any illnesses have been transmitted, you should seek professional medical attention.

The best way to control a brown dog tick infestation is to prevent it entirely. Here are a few simple practices you should follow:

If you have tried all of the methods mentioned above to manage a brown dog tick infestation and are still having issues with ticks, it may be time to bring in a pest control professional. A trained exterminator can create and implement a custom plan that is best suited for your home and property. When you combine these services with the veterinary care of your pets, you can get a better grasp on the situation and eliminate the threat.

Prevention is the best practice by far when it comes to pest control, but in some occurrences, an infestation will seemingly occur out of nowhere. In those instances, there is nothing wrong with seeking out professional assistance to help you gain some peace-of-mind. When combating against ticks, remember to frequently check yourself, your family, and your pets as a way to safeguard your home.