Ants are among the most disciplined creatures on earth. In ideal situations, ants can be compared to a fine-tuned machine. Each member of an ant colony has a function and performs its task perfectly, benefiting the whole group. Just as they work together for the betterment of their colonies, ants in their natural habitat positively affect the ecosystem. Ants help in the process of decomposition by eating organic waste, dead animals, and other ground litter. They are essentially the janitorial staff of the forest floor.

Ants are fascinating but extremely predictable creatures. Ants are going to do what they do best, and that can sometimes interfere with our lives. When you find that ants have invaded your home, you may have to take action to eliminate the potential hazards they bring with them.

What Are Pavement Ants?

If you see mounds of dirt piled up in expansion joints or cracks in the pavement, you are most likely looking at pavement ants. They will nest under other types of objects or debris covering the ground. It's also common to find them living indoors near heat sources during colder weather.

Pavement ants are most active around or after dusk. Light attracts these ants, and they tend to find their way inside of homes during the night. Once indoors, pavement ants will forage for food and water. Their diets vary but typically consist of sweets such as nectar, fruits, and the excreted honeydew of aphids. They also collect and eat dead insects, seeds, and grease. If they explore your home and find food sources such as open food containers, crumbs, or trash, they will be encouraged to return and have the potential to become a significant problem.

Pavement ants have four stages of life: egg, larva, pupa, and mature adult. The reproductive members of their colonies are winged and can fly. Though they have been known to swarm throughout the year, typically these winged males and females will swarm in the months of June and July. After the mating process has occurred, all of the females will seek out new nesting areas and become the queens of their colonies. 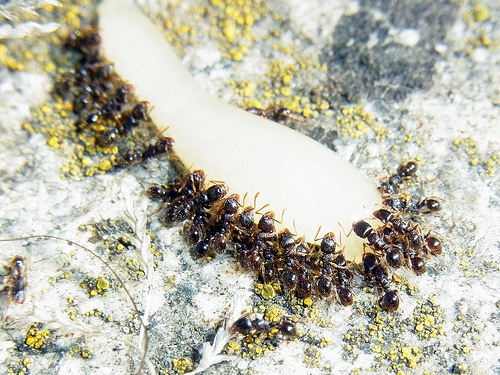 A pavement ant has appendages that are lighter than the rest of its body, which will range from light brown to black in color. These ants are roughly 3 millimeters in length, and their antennae consist of 12 segments and a club with three segments. Like other ants, they have an abdomen, thorax, and head. Pavement ants, however, have unique lines that run parallel along the head and thorax. Their thorax contains spines, and they also have a stinger.

Where Do Pavement Ants Live?

Pavement ants have spread throughout the United States since arriving from Europe many years ago. They are commonly found in the Midwest, the mid-Atlantic states, New England, Washington, and California. These ants build their colonies underground, often beneath pavement or asphalt. If there is no pavement available, they will make their homes under other objects and debris that sufficiently covers the ground. During the winter months, they have no issues with moving into a structure and nesting close to sources of heat.

Pavement ants can be difficult to eliminate due to them nesting deep underground. These ants aren't very picky when it comes to their diets, but they love to eat greasy foods. Because pavement ants are active at night and drawn to lights, your home can be a very enticing place for them. Your home will be particularly appealing if you allow easy access to the foods they love, such as grease and pet food.

Like other types of ants, pavement ants are capable of spreading bacteria into your home. These ants are usually docile towards humans, but are very aggressive towards other ants during the spring. They can bite, but their primary defense is their ability to sting. This can happen when the winged mating ants swarm or when they are defending themselves. Otherwise, they are not extremely dangerous to humans.

When they invade your home or garden, they can become a pain and will need to be exterminated as soon as possible to ensure your family's safety. They find their way into homes through cracks in concrete slabs, plumbing pipes, electrical wires, or cracks in the foundation. When foraging, they can be seen in trails that can lead you back to their point of entry.

Because pavement ants are more active at night, you may not notice that they have invaded your home right away. A few preventative measures that you can try to keep pavement ants from entering your home include the following:

If you have a severe infestation of pavement ants that are encroaching on your personal space, hiring a professional pest control agency will be a huge benefit. Professional exterminators can identify and neutralize the threat to your home and your family. They are also better equipped to use insecticides and different types of bait when working to eliminate pavement ants.

Though ants can make positive contributions to their environment, they can be a nuisance when they intrude on you and your family. Your home is supposed to be your refuge, and finding ants foraging in your kitchen is not a relaxing way to end the day. However, by taking the time to understand what you are dealing with when it comes to possible ant infestations, you can stay one step ahead of the threat.