How to Keep Spiders Out of Your Garage

Bulwark > Bug Blog > How to Keep Spiders Out of Your Garage

Spiders have earned a bad reputation because they are inherently creepy. With eight legs, multiple eyes, and the ability to spin a silken web from their abdomen, spiders are quite amazing and terrifying at the same time. Many people have arachnophobia or the fear of spiders, but spiders aren’t as bad as they may seem. Spiders keep the populations of other more dangerous insects and pests in check.

When spiders have infested your home, they can become a nuisance and even a threat depending on the type of spider you may be encountering. The most common place to have issues with spiders is the garage, where they leave behind their webbing and the remains of the insects and pests they prey on. Learning how to keep spiders out of the garage will help protect you, your family, and home from a spider invasion.

Spiders are classified as arachnids and can strike terror into the bravest of souls. They have two body segments, eight legs, multiple eyes, and fangs. Spiders are, in many ways, misunderstood, but that doesn’t change the fact that they scare people. They have earned a bad reputation due to how they act, look, and the fact they can spin webbing directly from their bodies.

In many cases, spiders live up to that reputation, especially when dealing with a black widow spider or a brown recluse spider. Both of these are venomous and pose a reasonably severe threat to humans when they bite. Other spiders, such as the daddy longlegs or harvestmen spiders, are harmless to humans but are still feared due to their appearance. Tarantula spiders, one of the largest spider species, typically cause no harm to humans and are even kept as pets, showing spiders’ diverse range of characteristics.

In general, spiders pose very little threat to humans but can become a pest when left unchecked, especially in your garage. A professional pest control agency can come in handy when your garage or other parts of your house have become overrun by spiders. They can identify the type of spiders you are dealing with, implement a plan to eliminate them, and help you prevent future issues with spiders.

Why Are Spiders in Your Garage?

Your garage is a susceptible area of your home when it comes to pests, including spiders. It is open to the environment more than other areas of your house and is typically not climate controlled. Most people also use their garage as a storage room, often forcing their cars to be parked outside on the driveway. All of these things contribute to the invasion of pests, such as insects and spiders.

Spiders are predatory creatures that hunt for their meals, so it only makes sense that if you have other pests that are prey to spiders living in your garage, you will have spiders taking up residence there. Add the clutter of stored boxes and unused items, and your garage just became a spider’s favorite hunting grounds. There are ways you can keep spiders out of your garage, but it will take a little effort. Implementing a few changes in your garage can help to keep spiders out, as the following list suggests.

Tools laying around on a workbench or shelves make for excellent hiding places for spiders. If you find that you have more tools than you have storage, it may be time to invest in a larger toolbox. Organizing your tools into a storage box will allow you to keep a clutter-free workspace with fewer areas for pests and spiders to hide.

If you have junk, clutter, and open boxes in your garage, you are inviting spiders to move in, especially with open storage boxes. Using sealed storage containers will help to keep spiders and other pests at bay. They are an excellent way of organizing and tidying up your garage, as well. Remember that pests and the spiders that hunt them don’t like to live right out in the open. The fewer areas they have to keep themselves hidden, the less likely they will be to stick around.

Spiders are nocturnal and tend to create their nests and breeding grounds in dark, secluded areas. Insects like moths, on the other hand, are attracted to artificial lights and will bring spiders into those areas to hunt. The best way to keep spiders away from your garage lights is to use natural lighting from windows during the day and to keep your garage lights off at night unless you are working in your garage and need the light. Keeping your lights off will reduce the number of prey insects and spiders around your light fixtures. 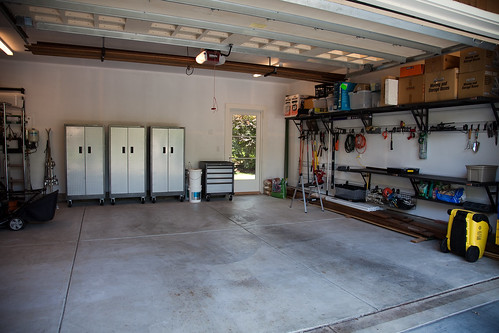 Cleaning your garage by sweeping the floors, removing insects and other pests from corners and windowsills, and knocking down visible spider webs will make your garage less enticing for spiders. Doing this at least twice a week will help keep spiders out of your garage as you are taking away food sources for them and their prey. By removing spider webs and nests, you are also destroying the spider’s eggs and youth, helping to manage their populations.

Whether old or new, any home can have openings around windows, doors, walls, and the foundation. These openings are a mini highway for insects, spiders, and other pests to gain access to your home and garage. Sealing these openings can prevent these pests from taking up residence in your private space.

There are repellents designed for insects and spiders alike. You may want to use them in tandem to keep spiders and the insects they eat out of your garage. These substances work by spraying them along any surface where pests have to cross when entering your home. When they dry, they create an invisible barrier that will kill and deter insects and spiders from passing to enter your home and garage.

After taking these suggested steps, you should see a drastic decrease in the spiders’ activity in your garage; this will be an ongoing process if you wish to keep them out for good. If you stay vigilant, you can maintain a spider-free garage.