A whole world of creatures exists on the edge of a human’s visual acuity. Fleas are among those that are visible to the naked eye, yet small enough to live a life utterly undetected by humans when they remain in their natural environment. However, when fleas infest domesticated pets or invade homes, they can find themselves under heavy scrutiny.

When your pets have fleas, it quickly becomes a serious situation for everyone involved, especially if your pets spend any length of time indoors. Fleas are insects that feed on the blood of animals and humans alike. They may prefer to live on fur-covered animals, but they aren’t picky about where they will get their next meal. If you are experiencing difficulty with fleas, there is hope when it comes to eliminating these pests.

Fleas are a small parasitic insect that feeds on the blood of domesticated pets, wild animals, and humans. They are tiny in stature, making them hard to detect without intense examination. Many species of fleas exist. The cat flea is the most common of them all, and they are challenging to wipe out.

Fleas will lie in wait for an animal to pass by and then jump onto the new host. They have heightened senses that provide them with the ability to detect increases in temperature and carbon dioxide. They also use lighting and shadows to locate their next host. These abilities enable them to find their next meal with ease. 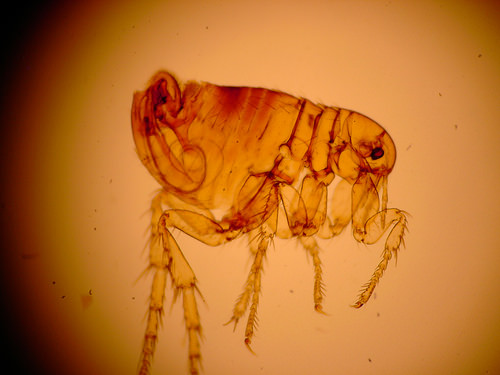 Fleas are quite small, measuring around 2.5 millimeters. They have strong hind legs and can jump incredible distances. They have a black to reddish-black coloration and will live their entire adult life on a fur-covered animal unless they are forced off.

Female fleas lay eggs that are oval in shape, smooth in texture, and white in color. Although females lay their eggs on their current host, the eggs typically slide off and land on the ground below. These eggs will most likely never be seen due to their tiny size.

Female fleas can lay anywhere between 18 to 25 eggs per day, at a rate of about one egg per hour. In ideal conditions, ten fleas can lay up to 1,200 eggs each week, resulting in a massive flea population once the eggs begin to hatch. A flea’s life cycle has four stages the egg, larva, pupa, and adult.

Where Do Fleas Live?

Fleas originate from the outdoors. They can live on any furry creature under the sun. The flea egg’s smooth texture causes it to slide off of the animal they are on and end up on the surface below. The majority of flea eggs in nature are in low-lying grassy areas. After fleas have invaded your home, their eggs can be found in your carpet and on your furniture.

Animals infested with fleas generally have what is known as flea allergy dermatitis. Fleas can cause their animal host to become dehydrated; combine this with the constant discomfort of itching and the skin-crawling sensation a flea-infested animal will become miserable.

Fleas can transmit some pretty nasty diseases to both animals and humans. These diseases can be transferred to different species by either the flea’s bite or its contaminated fecal pellets, making flea extermination a necessity when they are affecting your pets and your home.

People can be affected by many flea-borne diseases. The following are a few examples:

The diseases that a flea can transmit to pets, and other animals include the following:

If you have pets that spend time outdoors, it is imperative to take preventative measures. Waiting until there is a flea infestation inside your home before taking action, it will be harder to manage than if you put safeguards in place ahead of time.

If you believe you may be facing a home flea invasion, verify by inspecting your pet. Although fleas are small, adult fleas can be seen easily on your pet’s body, where they have less hair. Your pet will also let you know that something is wrong by excessively licking, biting, or scratching their skin and exhibiting hair loss.

Once you have determined that you are dealing with fleas and that your pet brought them into your home, you can take steps to control the pests. Use a flea comb on your pet to remove the adult fleas from your pet’s coat. Dip the comb in a mixture of water and dish soap to kill the fleas. You can also use veterinarian-recommended preventative treatments, which will kill the existing fleas and prevent them from infesting your pet again.

If you do not have pets, keep in mind that fleas can be brought into your home by other pests. In that case, a professional exterminator can show you how to get rid of the fleas, and whichever pest brought them into your home. With their expertise, they can pinpoint the source of the fleas and implement a plan to eliminate both pests at the same time.

Now you know what fleas are and how to recognize the signs of a flea infestation, you can take preventative measures to protect your home, family, and pets.