$50 off pest control. Become bug free for the holidays.

At some point in time, you may have heard about earwigs and the superstitious nature of their names. They have been demonized as insects that will enter people’s ears to eat their brains, but this is just an urban legend and has no scientific basis. These odd insects are of great benefit to their natural environments.

Earwigs help in the natural process of decomposition by eating decaying plant matter. It’s when earwigs find their way into your home, garden, or greenhouse that they become a force to be reckoned with. Learning how earwigs survive will allow you to effectively prevent them from causing havoc on your property or in your home.

What Is an Earwig?

An earwig is an unsightly insect that is misunderstood more often than not. Human brains aren’t on the menu, but this doesn’t mean that they should be left to run amuck. Earwigs are mainly nocturnal and will hide out in secluded areas in wait for nightfall. Lighting, such as porch or patio lights, can draw them in, and they may gather underneath outdoor seat cushions.

An earwig’s diet consists of decaying animal matter, other insects, and dead or live plant matter when in its natural habitat. While inside your home, their diets can be adapted to eat oily or greasy foods, indoor plants, and sweet foods.

Earwigs excrete a yellowish-brown, foul-smelling liquid from their scent glands as a defense mechanism. This liquid isn’t necessarily dangerous but can be irritating. They also have pinchers on the back of their abdomens that can be used to inflict a “bite” when threatened.

When reproducing, the female earwig will lay between 20 to 50 eggs that are oval-shaped, smooth, and white. Unlike other insects, female earwigs tend to their young and show an incredible motherly instinct. Before they lay eggs, they will run the male earwig out of the nest and clean the nest. After the mother lays the eggs, she guards them. To prevent mold growing on the eggs, she will periodically move the eggs around in the nest to keep them clean.

Once the eggs have hatched, the female earwig will feed and care for her young until they have grown and developed enough to defend against other insects and earwigs and provide for themselves. This motherly instinct is rare among insects. 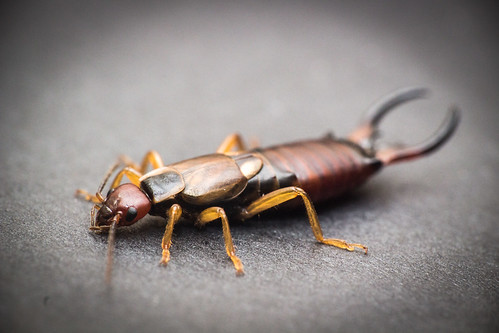 Earwigs are rather frightening at first sight, with the large pinchers positioned on their abdomens. They are commonly black or brown and have two sets of wings, with their back wings folded underneath their front wings. They use their pinchers to fold or unfold their back wings, capture prey insects, defend their nest, or probe narrow crevices.

Though most species of earwigs have wings, not all of them fly. The ones that can fly don’t do it that often. When their habitat is ideal, earwigs have little to no reason to fly. If they do decide to fly, they are rather clumsy in the air and will typically only flutter in short bursts.

Where Do Earwigs Live?

With more than 20 species of earwigs living in the United States, you are sure to have seen them on your property, especially if you have a garden or greenhouse. When conditions are right, earwigs will thrive. They prefer cool, undisturbed, and wet areas. Their natural habitats are usually in a well-sheltered area that has adequate, easy-to-access food sources.

Due to a pheromone that earwigs give off, they tend to live in large numbers. Areas that earwigs frequently nest when outside are under landscape mulch, in tree holes, exterior building cracks, and under other ground covering objects. When inside, they will seek out damp areas to camp out and will travel throughout your home along the baseboards.

They are agile on their feet and can often evade you with ease. As long as your home doesn’t have humidity issues, earwigs won’t be able to survive for more than a few days in the typically drier air that most homes have. If you have a large population of earwigs living on your property, whether in your garden or greenhouse you may see these pests regularly inside your home.

Earwigs aren’t known to cause any significant damage to the interior, exterior, or structural areas of your home. Although, they can wreak havoc on your garden or greenhouse. They will eat live vegetation, and a well-kept garden or greenhouse is a paradise for earwigs due to the moisture and abundant food sources they provide. They do eat dead or decaying plant matter and can benefit the forest floor, but when exposed to your indoor plants, greenhouse, or garden plants, they can cause remarkable damage to seedlings and mature plants alike.

Although earwigs aren’t a direct threat to humans, they do excrete foul-smelling liquids from scent glands that can irritate your senses. They can also use their formidable pinchers to inflict the semblance of a bite to protect themselves, but these pinchers don’t spread disease and aren’t poisonous. These two defenses are also used against other earwigs when defending their eggs and young.

Prevention is the best play when it comes to controlling earwigs. Outdoors, you will want to reduce the moisture in the soil by keeping any landscape covered — such as mulch or natural debris like dead leaves — away from your home’s foundation. Creating a dry area that extends between 6 to 12 inches away from the foundation will deter earwigs from entering your house.

Another preventative measure is to remove any large debris that covers the ground that can provide shelter for earwigs, for example, logs, landscape timbers, firewood piles, and decorative stones. You can also help eliminate earwigs and other pests by trimming any shrubs or tree limbs that are touching the side of your house. Doing so will prevent creating overly shady and damp areas where pests can gather.

In extreme instances where you feel that you are overwhelmed by the number of earwigs that you are dealing with, a professional pest control agency can provide you with the help you need. Having peace of mind makes it well worth reaching out for some expert advice.

Before you go, why not get a free pest control quote...