Termites vs Flying Ants: What is the Difference

Termites and flying ants are two completely different species of insect, but they can be easy to confuse when they have infested your home. Both of these insects serve a purpose and have a positive impact on their respective ecosystems when in their natural habitats. However, when they move into your home or garden, you can have a severe problem rather quickly. Both termites and flying ants can cause significant damage when they take up residence in your house.

Learning the differences between these two distinct insects will allow you to adequately defend against the unique threats that they pose. 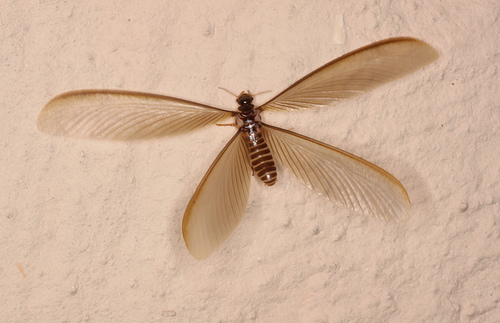 Termites are insects that are strongly attracted to wood, especially rotting wood, as a food source. However, their diet is more varied than most people know. The primary element that termites crave is cellulose. Cellulose is plentiful in the fibers of many different plants, but very few creatures on Earth have the ability to break down cellulose. Termites are one of these creatures. They contain cellulase, an enzyme that is required to breakdown cellulose into a reusable form.

One benefit to the environment that some scientists attribute to termites is that they reduce the chance of forest fires. Termites consume the rotting material of fallen trees, thus decreasing the required fuel for fires. By clearing such debris from the forest floor, termites also contribute to the improved flow of oxygen.

Termites typically get the nutrients they need from trees, plants, shrubs, and grass, but they will also eat plastic, paper, and drywall. This can cause damage to your home structurally and cosmetically. Termites have been known to cause so much damage to the structure of buildings that the buildings had to be condemned until the damage was repaired. As you can see, termites pose a severe threat to your welfare when they are eating your home for dinner.

Ants are, in a sense, nature's clean-up crew and contribute to the process of decomposition by eating organic matter, dead insects, dead animals and other materials that litter the forest floor. Ants that burrow into the ground help to turn the soil and create fertile topsoil. So when left to their own devices within their natural habitats, ants can be a positive force for the ecosystem.

Flying ants can be a little more tricky to deal with than termites, as multiple species of ants have wings when they are mating. So not only will you have to figure out if you are dealing with ants or termites, but you will also have to discover which species of ant you will have to defend against. Once you have determined that to indeed have a swarm of ants in your home, then you can start the process of treating for ants.

The damage that can be caused by ants who are nesting inside is different depending on the species of the ants. Pretty much all ants can spread bacteria or even pathogens into your home, so you could be at risk of contracting some nasty illnesses. For example, carpenter ants can spread sickness in a house but can also cause unsightly cosmetic damage along with structural damage very similar to that of termites.

How to Identify Flying Ants vs. Termites 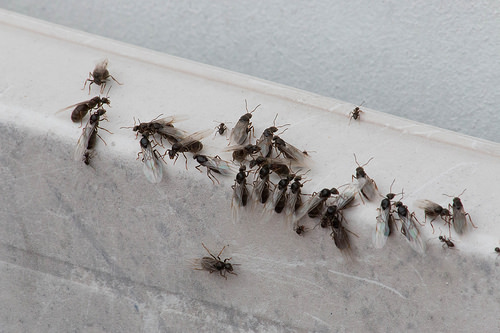 Identifying termites vs. flying ants can be fairly straightforward when you know the differences. From a distance, you might not be able to tell which one is swarming, but up close, you will be able to distinguish between the two.

The physical characteristics of termites vs. flying ants are noticeable to someone who knows what to look for. Though termites can be similar in size to certain species of ants, when observed up close, they have very distinguishable characteristics. A termite's wings are generally longer than its body and are rounded on the ends. Their wings are also of equal length on either side of their bodies. Termites do not have a pinched waist, and their antennae are straight. When they are mating, you typically will not see termites without wings mingling with termites that have wings.

A flying ant's wings are uneven in length and are more pointed on the ends. Flying ants also have the typical pinched waste that all ants have, and their antennae have a visible elbow and are not straight. When flying ants swarm, you can often observe wingless ants amid the swarm of the flying ants. Carpenter ants are the most common ant species to be mistaken for termites due to them living inside of homes and causing damage similar to what termites cause.

When a swarm is found inside, it is suggested that you hire a professional pest control agency to identify the pest and to implement a plan to eradicate the threat and prevent future invasions.

The best way to manage ants or any pests that could invade your home is to take the appropriate preventative measures to deter them from entering your home in the first place. Keeping your house clean, repairing water leaks, sealing off cracks, keeping all food sources securely stored, and trimming any landscaping plants away from the exterior of your home can help prevent pests from trespassing where they don't belong. Now you know how to identify termites vs. flying ants, you will be better prepared to protect your home and your family.