Mites are everywhere on earth, yet some of them are so small that the human eye never sees them. There is no substantial evidence of how many species of mites there are in the world, but a million or more species would be a good guess. They live everywhere: in the ground, in trees, on animals, in bodies of water, in human hair, or just about anywhere else that you can imagine.

These tiny little creatures do serve a purpose and contribute to the environment far more than most people realize. Mites can make crops grow healthy or sick, soil turn over slower or faster, and cause decomposition to slows down or speed up. Mites impact the world beyond what is scientifically understood. When mites such as clover mites have invaded your home, they can quickly become pests. Understanding how clover mites survive can help you determine how to get rid of clover mites.

What Is a Clover Mite?

Clover mites are in the arachnid family and are closely related to ticks and spiders. They are common in the spring and fall months and lay dormant through the summer and winter months. They can be a nuisance during the seasons they are active and are known to invade homes and other structures during this time.

Clover mites feed on the juices of plants commonly found in your lawn, grass, and clovers but do very little damage as they feed. They are known to infest over 200 different types of plants. If necessary, they can survive by eating mold and algae. Clover mites live relatively close to or on their food source.

Houses and other structures that have well-fertilized, healthy lawns and shrubs are the areas that will contain the densest concentrations of clover mites. During the spring, early summer, and fall, homes that fit these criteria are likely to be invaded by clover mites in search of breeding grounds. They can become a real pain once they have successfully infested your home. They can be found throughout your house but are typically drawn to the southern side of your home for warmth.

Female clover mites lay around 70 eggs each spring. They will lay these eggs under siding, in crevices of buildings, under bark near the base of trees, and in any other well-protected area. The temperature must be between 40 to 86 degrees Fahrenheit for clover mite eggs to hatch. If weather conditions aren’t right, the eggs and other stages of clover mites will hibernate through the winter or become dormant during the summer until environmental conditions permit them to hatch.

Once they hatch, the immature clover mites are immediately on the move in search of food. The young will pass through two nymphal stages before becoming adults, and they will crawl into sheltered areas to molt as they develop. 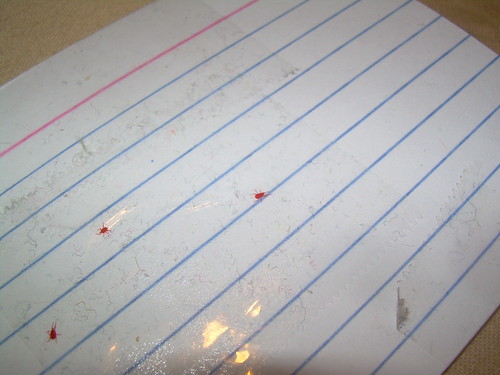 As with most mites, clover mites are tiny, but as far as mites go, they are one of the larger species. Clover mite adults measure 0.75 millimeters in length. Clover mite adults have an oval-shaped body and are about the size of the head of a pin. Clover mite young appear to be a brighter red, but adults are reddish-brown and a little less bright in color. Their abdomens are sparsely covered with feather-like plates.

Like all other arachnids, clover mites have eight legs. Their two front legs are extremely long and are often confused as antennae. Their other six legs are considerably smaller. Despite their short stature, they can move around relatively quickly.

Where Do Clover Mites Live?

Clover mites live throughout the entire United States and can be found in your front yard. With over 200 types of plants that these small critters feed on, they can be found just about anywhere. They thrive in well-maintained landscapes found around homes, gardens, businesses, and other structures.

Clover mites are not harmful to humans and do very little damage to the plant life they feed on. They don’t cause damage to clothing, furniture, or food items either. Though they don’t naturally cause any issues, they become an unwanted pest when they infest your home. When they invade your house in numbers, they can be very annoying and cause red stains if they are crushed. These red stains are not blood, but the pigment that gives the clover mites their color.

The sheer number of clover mites that can make their way into homes, medical facilities, and other structures are enough to cause concern. Once they have made their way indoors, they will soon die due to the lower humidity levels. This lower humidity will cause them to die from dehydration.

If you find that clover mites have infested your home, there are steps you can take to remove them and prevent future invasions. Using a vacuum or a damp sponge is a great way to remove immediate threats, but don’t stop with just vacuuming up the ones you can see. You will need to vacuum all of your floors, windowsills, and walls; this will not only remove visible clover mites but will also remove their molted exoskeletons and eggs.

Once you have finished vacuuming, you will need to properly dispose of the vacuum cleaner bag to prevent the clover mites from escaping back into your home. You should also check any pets for mites and brush or bathe them to remove the mites.

Prevention is the best way to discourage clover mites from infesting your home. Preventative measures may include keeping vegetation trimmed away from the exterior foundation of your home, sealing off exterior cracks or crevices in your house, and using insecticides on your lawn. If you have an excess of clover mites, a professional pest control agency can assist you.

All mites, such as clover mites, aren’t bad. Even so, having clover mites in your home as an unwanted guest can be an issue. Taking the time to put preventative plans into motion to prevent clover mites from infesting your personal space can save you the headache of dealing with these tiny pests.