If you happen to come across a velvet ant, let it be! These insects have one of the most intensely painful stings of any species around the world. When encountering one of these little critters, the best thing to do is go in another direction and stay out of its path.

Although velvet ants don’t usually cause any significant issues on your property, if you or your family have the unfortunate experience of provoking them, it often doesn’t end well. The sting of velvet ants has earned this ferocious insect the nickname “cow killer.”

What Are Velvet Ants?

Particular creatures on this planet just shouldn’t be messed with, and the velvet ant is one of them. This solitary creature has a vicious sting so painful that it weighs in at a No. 4 on the insect sting pain index, making it one of the most painful stings in the world. You definitely shouldn’t try to handle them, and you should always watch for them in your yard during the summer months.

The velvet ant is one of the most misidentified and misunderstood insects on the planet. In truth, they are not ants at all. They are solitary parasitic wasps that do not build nests or live in colonies. The female velvet ant is the one that most resembles an ant, as she has no wings and is a ground dweller. Females can be found traversing the ground in erratic motions as they forage for food. Male velvet ants are similar to females, but they have wings and can fly.

Due to their nomadic nature, the female ants use many defenses to travel long distances in search of food, a mate, and a place to lay eggs. The bright colors that the female velvet ants boast are thought to be a warning to potential predators. Their exoskeleton is sturdy and has smooth edges to prevent them from being crushed in the mouths of predators. They can also make a squeaky noise as a warning; this is accomplished by moving different sections of their abdomen to drag a tooth-like projection over a file-like surface.

These ants can also stridulate, which startles predators that are trying to eat them and causes them to spit the velvet ant back out. If these defenses fail, the last resort is for the velvet ant to sting. This tactic has an almost 100% rate of success in terms of enabling the ant to get away from the predator that is attempting to eat it. With all of these defenses, female velvet ants are nearly indestructible.

Velvet ant females seek out ground-nesting wasps such as yellow jackets. They will infiltrate their nests and lay eggs inside the cells where the yellow jacket larvae are located. They do this by releasing chemical markers that allow them to sneak into the nests of other wasp species and remain undetected. The velvet ant’s eggs will hatch, and their larvae will eat the larvae of the yellow jackets, spin a cocoon, pupate, and eventually leave the yellow jackets’ nest as adults. Adult velvet ants eat nectar like other wasps and bees. 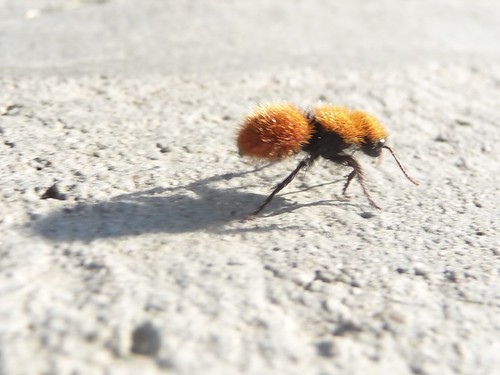 Velvet ants are covered with brightly colored hairs that include colors such as yellow, orange, red, white, or brown coupled with black. Females have no wings and stingers that are nearly half as long as their bodies. As a result, they closely resemble ants. Not only do the females look like ants, but their colors mimic different species of ants depending on their geographic location.

The males have wings and can fly. They have no stingers but look more like a wasp than an ant, and they are rarely seen.

Where Do Velvet Ants Live?

Velvet ants are native to the eastern United States and can be found in the north from Connecticut to Missouri. In the south, they can be located anywhere from Florida to Texas. They live solitary, nomadic lives, are always on the move during the day, and do not need a nest to call their own. Instead, they lay their eggs in the nests of other unsuspecting wasps and bees.

Velvet ants don’t usually pose any threat to humans unless they are stepped on or improperly handled. Though their sting is included in the top five most painful insect stings, the venom isn’t very potent. The pain from a sting can last for up to 30 minutes and is said to be excruciating.

When you feel that velvet ants may be a threat to your family or your pets, you can contact a professional pest control agency and have them eliminate the danger.

Trained professionals can determine if you really have a problem and then implement a plan to keep them out of your yard. Velvet ants are a rare species, and if there are no more than one or two on your property, they can be beneficial by helping to keep ground-nesting wasp and bee populations under control. If one happens to make its way into your home, you can remove it carefully from inside and place it back outside without worrying about it reentering.

Due to their extremely tough exoskeleton, velvet ants are practically impossible to crush, and most stings come from accidentally stepping on them. The best control solutions for velvet ants include the following:

Pests can cause significant problems when they invade your property and home. Learn as much as you can about the various pests you may encounter. By gaining knowledge about velvet ants, you can be better prepared to protect your family and your pets.